Discovered how cells change during breastfeeding, even after years of milk production

Breast milk is a super "food" that changes over time to meet the new needs of the growing child, but also in reaction to hormonal changes or in the lifestyle of the mother and baby

We know that the breast milk it is a nutritional source that has evolved specifically to meet the nutritional needs of infants and young children, but much remains to be understood about its composition and its changes during breastfeeding: in fact, breast milk is a dynamic fluid, containing millions of cells, whose phenotypic properties are still poorly understood.


Now, for the first time, researchers from the MIT University of Massachusetts have tried to investigate the composition of this special "food" and, in particular, the changes that occur at the cellular level during the various stages of breastfeeding.

In fact, there are substantial differences between the milk secreted a few days after childbirth and that secreted a few months after the birth of a child. These changes are related to hormone levels, but also to the onset of pathologies in the new mother or infant, and all result in a variety of changes in gene expression in the cells of the mammary gland.

The mammary glands can produce more than one liter of milk per day, for months or even years after giving birth. So far, studying these glands has been an impossible task, as this tissue cannot be subjected to invasive tests, such as a biopsy. However, the recent discovery of the presence of many mammary gland cells within breast milk has opened up a new study possibility for scientists.

The MIT researchers then collected breast milk samples from 15 mothers, who provided them at different stages of their breastfeeding (from a minimum of 3 days after delivery to a maximum of 632 days); together with the samples, the authors of the study also collected information relating to any changes in the health or lifestyle of mothers and their children.

(Also read: Breastfeeding is better, no matter what the commercials say!)

From the collected milk samples, more than 48.000 cells were isolated and analyzed using single-cell RNA sequencing - a technology that makes it possible to determine which genes are being expressed in a cell at any given time. From the analysis they emerged 10 different types of cells: a population of fibroblast cells, two types of epithelial cells and seven types of immune cells. 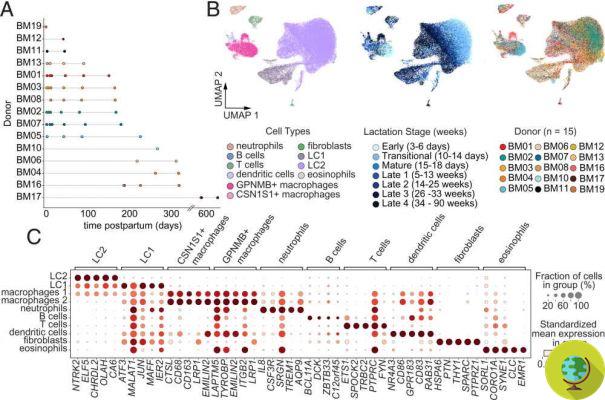 Among the epithelial cells present, the most abundant are certainly i lactocytes - cells that express many genes for proteins found in breast milk (such as lactalbumin), as well as the transporters needed to secrete milk proteins, micronutrients, fats and other components of breast milk.

Among the lactocytes, there are some considered particularly active in the production of milk, and others that have a more structural role within the mammary gland. There are also other subtypes of cells, for which researchers are hypothesizing a specific role.

However, the time factor is not the only factor affecting changes in the composition of breast milk: the comparison between the milk samples and the changed life and health conditions of the mother and baby also provided interesting results. It has been seen, for example, that even a child's illness, his inclusion in a nursery class, the use of infant formula, the mother's intake of hormonal contraceptives play an important role in the quality of breast milk.

Now the researchers are working for find stronger links between milk composition and environmental factors (pollution, smog), but also to find out more about how breast milk changes naturally over time. This information could prove to be very useful in helping mothers during the delicate phase of breastfeeding and in preventing painful conditions such as mastitis (inflammation of the mammary gland).

Valentine's Day: the vegan menu for the most romantic dinner of the year ❯

add a comment of Discovered how cells change during breastfeeding, even after years of milk production