Dash diet: the diet that fights depression and hypertension 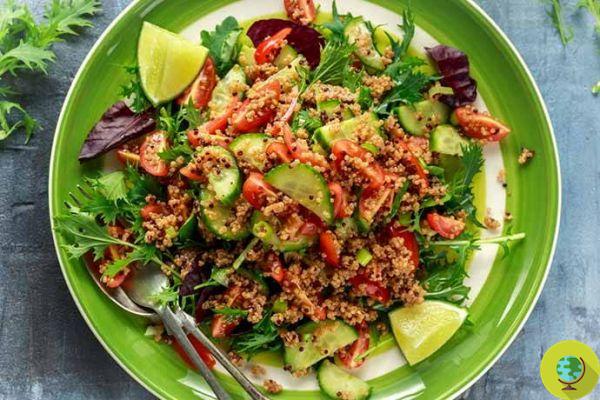 Dash diet. A diet very similar to the Mediterranean one which, in addition to making you lose weight, if followed correctly, offers a series of other benefits. A new American study has shown that this diet is able not only to fight high blood pressure but also to reduce the risk of depression.

Dash Diet. A diet very similar to the Mediterranean one which, in addition to making you lose weight, if followed correctly, offers a series of other benefits. A new American study has shown that this diet is able not only to fight high blood pressure but also to reduce the risk of depression.

To study and underline some beneficial effects of the Dash diet was a study conducted by the Rush University Medical Center in Chicago which focused in particular on analyzing the antidepressant power of this diet which is characterized by the high consumption of fruit, vegetables and Whole grains.

The Dash diet is a real food plan designed to keep pressure at bay, conceived and developed by Harvard University with the main purpose of treating patients with hypertension. This diet, whose name is the acronym of Dietary Approaches to Stop Hypertension, is in summary a diet in which foods rich in sugars and saturated fats are strongly limited and fresh and vital foods are preferred instead with the aim of normalizing the pressure.

For hypertension there are already many confirmations of its effectiveness but now the new US research has also wanted to evaluate the possible beneficial effects on mood. To do this, he took a sample of 964 elderly people (average age 81 years) monitored for 6 and a half years in which their nutritional habits and their psychological state were compared. The participants were divided into 3 groups based on the diet they followed (Dash, Mediterranean or traditional Western) and just so it was possible to notice that those who were more faithful to the Dash diet were 11% less likely to suffer from depression. compared to those who followed a diet in which fruits, vegetables and whole grains were scarce to the advantage instead of red meat, fatty foods and sugars.

As Laurel Cherian, author of the study pointed out:

“Depression is common in the elderly and more common in people with memory problems, high blood pressure and high cholesterol or in those who have had a stroke. There is evidence linking healthy lifestyle changes to lower rates of depression, and this study sought to examine the role diet plays in preventing depression. More studies are now needed to confirm these findings and to determine which are the best nutritional components of the Dash diet to prevent depression and to better help people keep their brains healthy. "

However, it seems that this beneficial effect is due to a high consumption of fruit, vegetables and whole grains. And it's not the first time that research has supported the fact that eating right can have beneficial effects on our brain and mood. Let's not forget that our Mediterranean diet is also excellent in this sense.

If you are interested in learning more about diet and foods against depression, read also:

Blood group diet: does it have scientific validity? ❯

add a comment of Dash diet: the diet that fights depression and hypertension