Cold salad of bulgur, tomatoes and grilled courgettes, dressed with lemon emulsion. Or, if you prefer, call it a variant of the Tabbouleh or Tabulè, a dish of Levantine cuisine normally served at the beginning as part of the Meze. This is the perfect vegan recipe against the heat that will plague us again this week, under the name of Minos 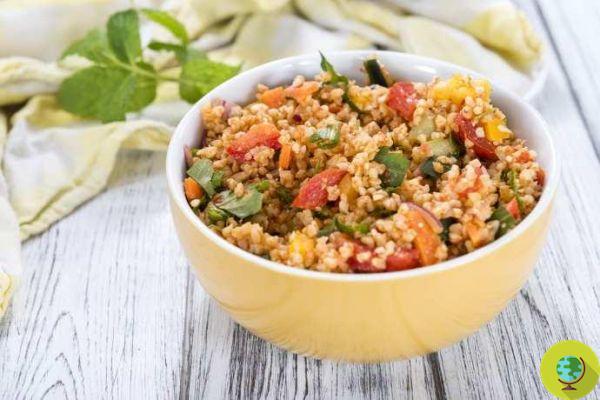 Cold bulgur salad, grilled tomatoes and courgettes, topped with lemon emulsion. Or, if you prefer, just call her variant of the Tabbouleh or Tabbouleh, a Levantine cuisine normally served at the beginning of the Meze. This is it perfect vegan recipe against the heat.

Un vegan cold dish based on bulgur, which we will dress with simple and genuine ingredients. Bulgur, originally from Turkey, is typical of Middle Eastern cuisine, where it is generally consumed cold. It is obtained from the durum wheat, which is first sprouted, then it is dried and chopped into compact and coarse grains. Rich in nutrients, bulgur provides carbohydrates, fiber, phosphorus, potassium and B vitamins.

The Bulgur Tabulè salad is the basis of many variations of the Middle Eastern tradition. The Lebanese version, for example, includes adding fresh spring onion, cucumbers and chopped parsley, but it can be seasoned in a thousand ways, from vegetables to seitan or tofu bites, just let your imagination run wild. I fell in love with this variant that is ideal for fighting the heat, although I admit that grilling zucchini right now was a bit sadistic.

First of all, we grill the zucchini, which, once cooled, we will cut fillets, as well as for i tomatoes deprived of seeds and aqueous part. We then prepare the bulghur, boiling it in 200 ml of water for each hectogram. My bulgur wasn't pre-cooked, so I let it boil for 20 minutes, until the kernels absorbed the water. If we use pre-cooked bulgur, just follow the instructions on the package. While the bulgur is cooking, let's prepare an emulsion with lemon juice, oil, salt and pepper, vigorously beating the two liquids until they are amalgamated. When the bulgur is ready, let it cool in the salad bowl. Once cold, season with the zucchini and the sliced ​​cherry tomatoes, the emulsion and a few mint leaves. We let it rest in the fridge for a few hours and serve. I can no longer do without it: bulgur, you are my love!

Salad in a bag, be careful! Risk of antibiotic resistant bacteria ❯

add a comment of Cold salad of bulgur, tomatoes and grilled courgettes