Children's finger length is an unexpected economic indicator. I study 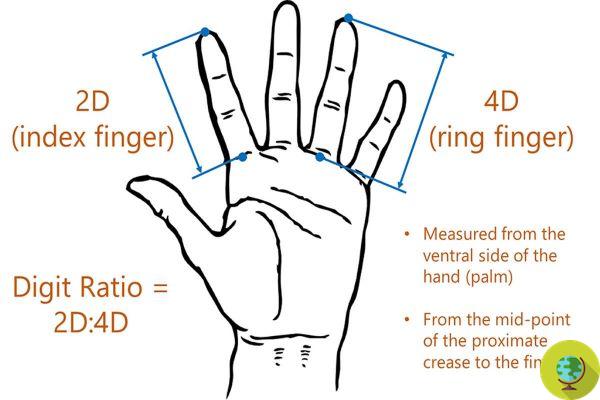 A study based on the length of the fingers investigates the possibility of increasing the chances of successful reproduction of the offspring.

Low-income women tend to feminize their children during a pregnancy by regulating their hormones, while high-income women tend to masculinize them. To find out is a study based on the length of the fingers and on the assumption that that would simply be an unconscious evolutionary response aimed at increasing the chances of successful reproduction of one's offspring.


The research, conducted at Swansea University, was based on the Digit Ratio, i.e. the relationship between the length of a person's index and ring finger, known as 2D: 4D ratio. A longer ring finger is an indicator of higher testosterone levels, while a longer index finger is an indicator of higher estrogen levels. In general, men have the longest ring finger, while women have longer index fingers.

Read also: Fingers of the hand: this is what their length reveals about our personality

Now, in this study, the ratio was related to the parents' income.

The team used data from more than 250 people from around 200 countries who were taking part in a BBC online survey. Participants were asked to measure their index and ring fingers and were given instructions on how to do it accurately. They were also asked to indicate their parents' income level.
Children of parents with above-average incomes had a low 2D: 4D ratio, with longer ring fingers, indicating high testosterone and low estrogen levels before birth, hallmarks of a more masculinized fetus

It should also be noted that these effects were present for both men and women.

"Our results show that high-income mothers can secrete higher levels of testosterone than estrogen in early pregnancy, thus masculinizing their sons and daughters," says Manning. Conversely, low-income women can secrete low levels of testosterone, which will feminize their male and female offspring. This is an evolutionary response that mothers will not be aware of, let alone be able to control. It is geared towards giving their offspring the best chance for reproductive success. For high-income mothers, the benefits of high testosterone for their sons are likely to outweigh its disadvantages for their daughters. For low-income mothers, the fitness gain of the feminized daughters is likely to outweigh the fitness loss of the feminized sons. This model is consistent with the Trivers-Willard hypothesis ”.

These are models that undoubtedly also suggest important effects on public health linked to poverty.

“Low testosterone and high estrogen levels in male fetuses can predispose those men, as adults, to poverty-related diseases such as heart attacks, strokes and hypertension. “Poverty is known to be closely associated with poorer health. What our research indicates is that this link can be replicated across generations, ”concludes John Manning, explaining how the findings could shed light on susceptibility to certain diseases.

Lutein keeps the brain young. Here are the foods that contain the most ❯

add a comment of Children's finger length is an unexpected economic indicator. I study