Blueberries, the best anti-aging! That's why they age us well 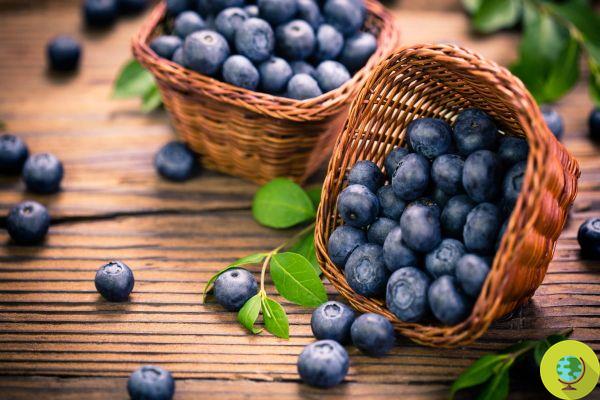 Blueberries make us age well, has revealed a collection of studies highlighting all the benefits that come from their consumption.

That blueberries did well was well known but now a collection of studies that emerged from a symposium titled "Blue vs. Gray: Potential Health Benefits of Blueberries for Successful Aging", which took place at the World Congress of Gerontology and Geriatrics , has shown that there is more: i blueberries also make you age well.


Ne a cup a day would be enough to improve blood pressure, reduce it, and make blood vessels work well and all this would be above all thanks to Anthocyanins, phytochemicals on which the dark color of the fruit depends.

Not only that, according to one of the studies that are part of the collection also i polyphenols contained in blueberries have beneficial effects on health because improve memory, a result the researchers arrived at after performing a memory test on a group of elderly people. Another benefit concerns the cognitive deficit because those who consume more blueberries can reverse their trend with age.

On the other hand, another study published in the journal Applied Physiology, Nutrition and Metabolism had highlighted how much the concentrated blueberry juice was precious for the brain of the over 65s, improving cognitive abilities, increasing cerebral perfusion, strengthening working memory.

And still the blueberry turned out to be a super antioxidant because of the flavonoids it contains, which help prevent various metabolic, cardiovascular and degenerative diseases.

And like blueberry, other berries and red fruits such as strawberries and cherries are also rich in antioxidants, which is why consuming them in abundance, even combined with each other, is a panacea for the health of young and old.

Not negligible anti-inflammatory properties of the fruit, which gives its best, in nutritional terms, when it is wild. It is therefore better, if possible, to collect it in the woods or to favor small local producers.

On blueberries and natural antioxidants it could also affect:

Blueberries: eaten regularly they lower the pressure in menopause ❯

add a comment of Blueberries, the best anti-aging! That's why they age us well