Turmeric, great for memory, mood and Alzheimer's. The new confirmation 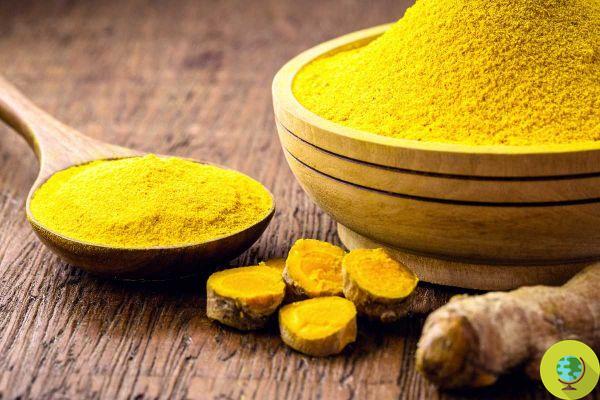 Turmeric improves memory and mood and could be a valuable ally to counteract the effects of Alzheimer's.

Turmeric improves memory and mood and could be a valuable ally to counteract the effects of Alzheimer's.


Do you want to improve your memory and live a happier life? Try adding some turmeric to your diet. With proven anticancer properties and antioxidant qualities, a precious natural remedy against joint pain and flu and also exceptional for weight loss, turmeric has another fantastic property on its side: it pampers memory and mood and could be a valid ally to counteract the effects. Alzheimer's.

To say this are the researchers of the University of California at Los Angeles who, in a study published in the American Journal of Geriatric Psychiatry, speak in particular of the properties of curry and how the curcumin, the active ingredient in turmeric, which gives Indian curry its distinctive bright color, directly benefits the brain.

Much of the benefits due to the consumption of curry are due to curcumin, the main biologically active component of turmeric (about 5% of the weight of the dry root).

To reach these conclusions, the researchers divided 40 adults, aged between 50 and 90 and with mild memory impairment, into two groups. One received a placebo, while the other was given 90 milligrams of curcumin twice a day for 18 months. All subjects then underwent standardized cognitive assessments at the start of the study and every six months thereafter. Additionally, about 30 of the subjects underwent random Positron Emission Tomography (PET) scans to measure their brain activity.

After analyzing the results, they found that those who ingested curcumin recorded "significant improvements in memory and attention span" compared to those who did not. In fact, the memory tests for those who took the drug were 28% better. And not only that: those who had taken curcumin reported that they were from better mood.

This effect, the American researchers explain, “could be due to its ability [of curcumin] to reduce brain inflammation, which has been linked to both Alzheimer's disease and major depression. These results suggest that taking this relatively safe form of curcumin could provide significant cognitive benefits over the years. "

In short, once again it is clear that taking these spices is good, but always be careful not to overdo the doses. Too much is also good in this case and not only: people who suffer from gallstones better stay away from turmeric and curry, because they could worsen the course of the disease.

Turmeric: Is It Better Than Medicines? ❯

add a comment of Turmeric, great for memory, mood and Alzheimer's. The new confirmation