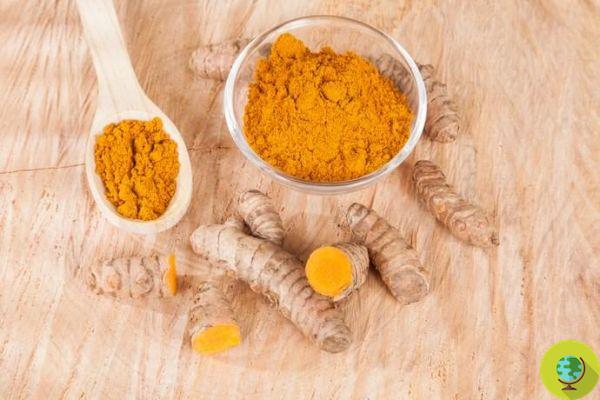 Turmeric, valuable in preventing and counteracting periodontitis and rheumatoid arthritis. Confirmation comes from a new study conducted in Greece

Turmeric, valuable in preventing and combating periodontitis and rheumatoid arthritis. Confirmation comes from a new study conducted in Greece.

Thanks to a series of experiments, researchers have shown that curcumin is useful as a preventive measure but also to treat periodontitis and as a natural immunosuppressant for rheumatoid arthritis.

Periodontitis is mainly caused by the bacterium Porphyromonas gingivalis and which leads to tooth decay. It is a major public health problem and a risk factor for the development of arthritis. The latter is an autoimmune rheumatic disease characterized by inflammation leading to joint destruction, loss of joint function and disability if left untreated.

“Curcumin appears to have effective antibacterial activity against P. gingivalis infection and biofilm formation. In addition to its antibacterial, antioxidant and anti-inflammatory action, curcumin exerts unique immunosuppressive properties through the inhibition of Th17 pro-inflammatory responses and the promotion of regulatory T cells, thus suppressing autoimmunity, ”the scientists explain.

There have been two clinical studies carried out on humans, the results of which have been encouraging. In the first, 45 patients with arthritis were divided into 3 groups, the first taking only curcumin (500 mg), the second diclofenac sodium (50 mg) and the third curcumin and diclofenac together. Effect 8 weeks after treatment was examined. Administration of curcumin did not cause adverse reactions and all patients showed significant improvements. Furthermore, people treated with curcumin alone had better results than those who had taken diclofenac alone.

In the second randomized study, the efficacy of curcumin was evaluated compared to that of a placebo in patients with rheumatoid arthritis. In the group of people who took 250 or 500 mg of curcumin, the improvement in disease was accompanied by a significant reduction in inflammation markers and rheumatoid factors, compared to patients who took placebo.

"These results are encouraging and should be confirmed in larger studies, which will also address the safety profile of long-term use of curcumin or tolerance of a supplement," the scientists explain.

Turmeric and hepatitis alarm. Do we have to forgo its benefits for this? ❯