Tumors: A quick saliva test is being studied to diagnose cancer 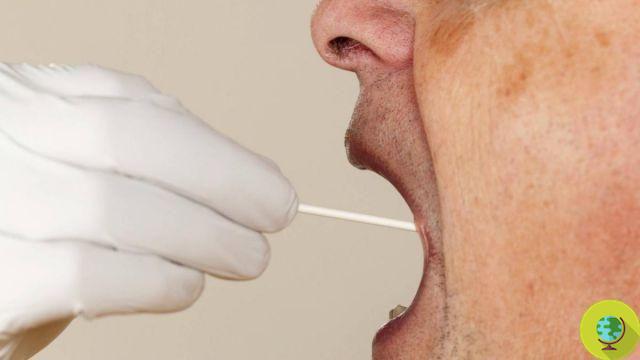 In the future, a saliva test - fast, non-invasive and also to be done at home - will tell us if we have cancer (especially lung and pancreas), thanks to the so-called "liquid biopsy"


Tumors e early diagnosis: in future, a saliva test - fast, non-invasive and also to be done at home - it will be able to tell us if we have cancer (especially of the lungs and pancreas), thanks to the so-called "liquid biopsy", Able to detect tumor DNA fragments in body fluids.

For now it is a prototype presented by David Wong, professor of oncology at the University of California at Los Angeles, at the American Association for the Advancement of Sciences (AAAS) conference.

This is a test which, if approved by the American Food and Drug Administration, it will have positive effects on early diagnosis and a major economic impact: the kit, in fact, would cost about 20 € and it would give a result in just 10 minutes.

Currently, scientists can only use certain blood tests to detect cancer - tests that give results in two weeks and can monitor the spread of cancer, but cannot be used as an initial test.

In this case, instead, the liquid biopsy to find a tumor with a simple test: Professor Wong has shown that a single drop of saliva contains enough data to make a definitive diagnosis as soon as a tumor develops.

The exam is 100% reliable and it is very easy, so much so that it can be done in the doctor's office, pharmacy or at home.

For now, the biopsy has been found to be reliable for lung and pancreatic cancer, for which there are no effective early screening, while a clinical trial in China on a group of patients with these tumors should soon start.

An effective test, therefore, but the authors of the project themselves remain with their feet on the ground, aware that in addition to the liquid biopsy, other diagnostic tools must also be considered.

In any case, what is worth pointing out here, and this new test confirms it, is that theEarly detection is crucial. Also always keep in mind that the way of prevention always passes first of all from our table and our lifestyles. Here are 8 rules you should follow if you want to reduce your risk of getting cancer.

Cancer: here are the 10 golden rules for staying healthy while eating

Tumors: Here is the table of anti-cancer foods

The whole truth about aspirin and heart attacks: here's why it doesn't work ❯

add a comment of Tumors: A quick saliva test is being studied to diagnose cancer