The whole truth about aspirin and heart attacks: here's why it doesn't work 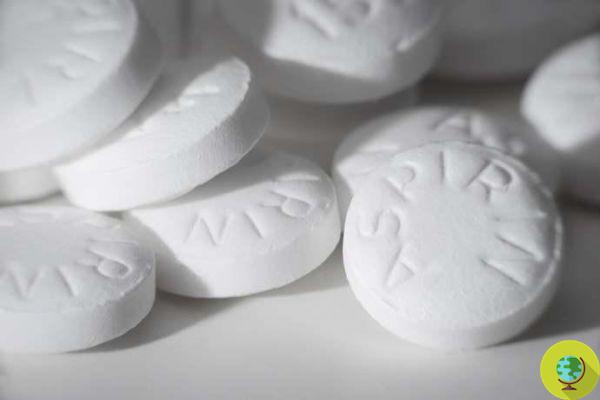 According to new analyzes, it is uncertain whether aspirin should be recommended for cardiovascular prevention in diabetic patients without existing cardiovascular disease.

Taking a low-dose aspirin every day has long been known to reduce the chances of another heart attack, stroke, or other heart problems in people who have already had one. Now new studies show that, on the other hand, there is no need to "prevent" with acetylsalicylic acid in people who are predisposed.


According to the results of new research published in the New England Journal of Medicine, aspirin prevented serious vascular events in patients with diabetes who did not already have cardiovascular disease, but it caused almost as many major bleeding and there was no effect on tumors.

So far and for many years, many studies have indicated that a substantial reduction in the risk of acute cardio-vascular events could be achieved in both type 1 and type 2 diabetes patients with systematic aspirin. And this was true both before and after a first episode of myocardial infarction or stroke. Furthermore, many analyzes of primary prevention (in subjects initially free from cardiovascular disease), and secondary prevention (already suffering from cardiovascular disease) demonstrate the effectiveness of chronic treatment with acetylsalicylic acid and indicate the effectiveness of preventive treatment. long-term with low doses of acetylsalicylic acid, especially in diabetic subjects with high cardiovascular risk.

Now, Professor Jane Armitage, a researcher at the University of Oxford, UK, said: “While we have clearly shown that aspirin reduces the risk of vascular events, including heart attacks, strokes and mini-strokes, it has also increased the risk of major bleeding, mainly from the gastrointestinal tract, so overall there is no clear benefit. It had been suggested that low-dose aspirin might protect against cancer, but we have not seen any reduction in any cancer; we are continuing to follow the participants to see if any benefits appear later ”.

Over the years, serious health effects that occurred during the follow-up of the participants were recorded, including in particular:

- first major bleeding, which included bleeding in the head or brain, intestines or other parts of the body that was severe enough to be fatal.

As a result, overall, the number of participants who avoided a severe vascular event was outweighed by those who experienced a major bleeding. Even among trial participants at the highest vascular risk (over 2% per year), a similar number of serious vascular events such as major bleeding caused were avoided. It was not possible to identify a group of patients in the study in which the benefits clearly outweighed the risks.

Previous studies had suggested that aspirin might produce a reduction in tumors in the intestine, with the effects increasing over time. A large number of tumors were observed during the follow-up in the ASCEND study and yet no effect of aspirin on gastrointestinal carcinoma was observednor was there any apparent effect of aspirin on overall cancer risk.

Armitage explains: “We have shown that aspirin reduces the risk of vascular events in primary prevention, such as in people who already have cardiovascular disease, but these benefits are offset by the number of major bleeds caused by aspirin. This is an important finding with implications for many millions of people who have diabetes but have not yet had cardiovascular events ”.

Turkesterone: what it is and why you shouldn't use the supplement to gain muscle mass ❯

add a comment of The whole truth about aspirin and heart attacks: here's why it doesn't work