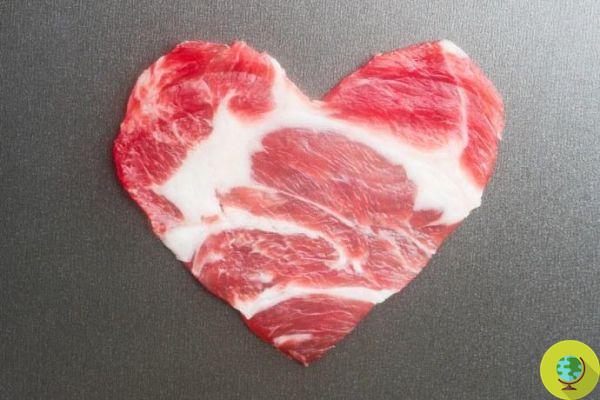 Red flesh, enemy of the heart. We have known this for some time but now a new study has revealed the mechanisms linked to the increased risk of heart disease and the role of intestinal bacteria in this process.

Red flesh, enemy of the heart. We have known this for some time, but now a new study has revealed the mechanisms linked to the increased risk of heart disease and the role of gut bacteria in this process.


The research, led by Stanley Hazen of the Cleveland Clinic built on previous work focusing on one substance in particular called TMAO (trimethylamine N-oxide), a by-product of intestinal bacteria that forms during digestion and can lead to the development of cardiovascular disease.

Specifically, TMAO is produced when gut bacteria digest choline, lecithin, and carnitine, nutrients abundant in animal products such as red meat and liver.

Elevated levels of TMAO in the blood had already proven to be a powerful tool for predicting future risks of heart attack, stroke and death, according to previous research led by Dr. Hazen and his team, and subsequently replicated around the world. The test has now been used clinically.

The study involved 113 participants who sequentially (in random order) ate complete meals of red meat, white meat or meat sources equal to 25% of their daily calories.

After a month on the red meat diet, the vast majority had increased levels of TMAO in their blood and urine. On average, they grew in blood about 3 times during the red meat diet, compared to the white meat or vegetarian ones. In some people, even a 10-fold increase was found. The same goes for urine. The study also found that the high presence of TMAO had reduced the kidneys' ability to excrete the substance.

Yet, it was enough to reduce or rather eliminate red meat to drastically reduce its levels within a month.

“We know that lifestyle factors are critical to cardiovascular health and these findings build on our previous research on the link of TMAO to heart disease and provide further evidence of how dietary interventions can be an effective treatment strategy for reduce TMAO levels and the risk of heart disease, ”said Dr. Hazen.

The study was published Journal of Clinical Investigation.

This famous bouillon cube has been withdrawn from supermarkets: beware, it is dangerous for allergic people ❯