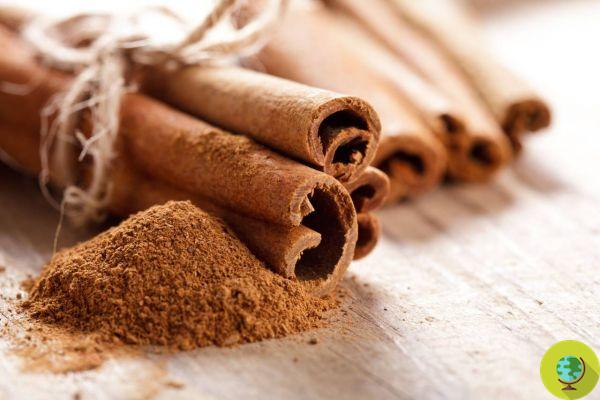 A spice that we often put on sweets can help us improve blood sugar and blood sugar levels. Let's see together which spice we refer to.

La cinnamon, a spice native to Southeast Asia, is one of the favorite toppings to put on desserts to give that extra dry and pungent touch. However, cinnamon also offers multiple benefits for our health thanks to its anti-inflammatory and antioxidant properties and his ability to help lower blood sugar levels in people with diabetes. (Also Read: 10 Alternative Uses Of Cinnamon)


Discover all the benefits of cinnamon on your health:

Reduction of blood sugar levels and improvement of glycemic control

The results of scientific research on the effects of cinnamon on blood sugar are not yet definitive, but what has emerged is extremely promising. A study in the Journal of Medicinal Food was able to demonstrate the potential of cinnamon inlowering of blood sugar in diabetic patients. When subjects were given cinnamon extracts, a significant one occurred reduced fasting blood sugar levels, prompting researchers to state that cinnamon may be a useful alternative therapy for people with type 2 diabetes or prediabetes.

Further research published in the Journal of the Academy of Nutrition and Dietetics analyzed 11 different studies on cinnamon and showed that taking cinnamon supplements has a positive impact on health. levels of Hb1Ac (glycated hemoglobin), which indicates that cinnamon intake not only has an immediate impact on sugar levels, but can also result in a better glycemic control in general.

When you suffer from 2 type diabetes, the body's response toinsulin is impaired and this leads to elevated blood glucose levels. Animal studies had already shown that cinnamon can effectively mimic insulin and even make the insulin in the body more efficient. This, in turn, improves the insulin sensitivity, helps the body's cells to respond better to it and facilitates smoother transport of glucose.

A study published in the European Journal of Applied Physiology and carried out in humans confirmed previous research: patients who were given 3 g of cinnamon per day reported improved insulin sensitivity and glycemic control.

After a large meal, blood sugar levels tend to rise significantly especially if you eat foods rich in carbohydrates. These fluctuations in sugar levels increase the risk of chronic diseases such as diabetes and aggravate the condition for those already suffering from it. A study in The American Journal of Clinical Nutrition indicates that consuming cinnamon along with a high-carbohydrate meal can slow the rate at which food is digested in the stomach and helps check for spikes in postprandial blood glucose levels. However, further studies are still needed to definitively confirm this hypothesis.

Additional benefits of cinnamon that are not related to diabetes are:

Cinnamon water: 10 amazing reasons to drink a cup a day (and how to make it)