These insecticides are useless against cockroaches and cockroaches. They just poison us! I study 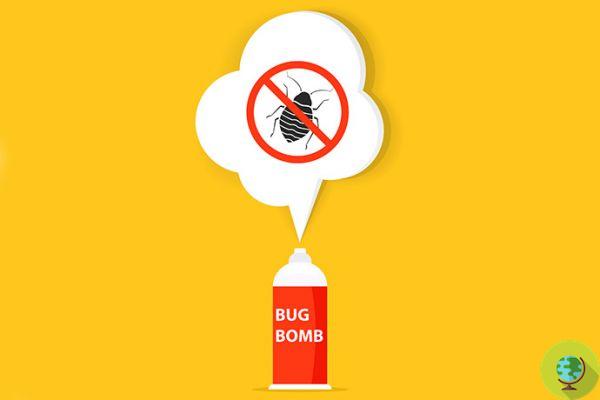 When cockroaches pop into our homes we are actually tempted to use drastic remedies to eliminate them. Among these there are insecticide bombs, technically "Total-release foggers (TRFs)". However, it is not a good idea, since these solutions have proved ineffective if not to expose us to the harmful action of chemicals.

The so-called 'bug bombs, insecticide bombs are useless and expose us to harmful chemicals

When the Beatles peeping into our homes we are actually tempted to use drastic remedies to eliminate them. Among these there are the insecticide bombs, technically "Total-release foggers (TRFs)". However, it is not a good idea, since these solutions have proved ineffective if not to expose us to the harmful action of chemicals.

The "bombs" that are supposed to ward off and kill insects would not actually do their job at their best and would have the further disadvantage of being harmful to human health and that of pets. To support this is a new "research from North Carolina State University that has shown that the so-called" bug bombs ", or are ineffective against cockroaches.

This could be attributed to the fact that the chemicals that release these devices cannot reach the places where the insects come out, such as low surfaces or the inside of furniture. The bombing they carry out is indiscriminate and there are risks associated with exposure to the substances with which they are made.

The danger lies in some toxic residues that insecticide bombs leave on floors and furniture, particularly in the central areas that cockroaches avoid but which humans and pets use instead.

The team tested four different commercially available insecticide bombs (made with various chemicals) and their effectiveness in five housing districts. These were chosen as they had a moderate to severe infestation problem with the German cockroach (Blattella germanica). All of the bombs used in the study contained pyrethroids, the team explains, a class of fast-acting insecticides. Some also contained other active ingredients, such as piperonyl butoxide, which prevents cockroach bodies from metabolizing insecticides.

Experts first estimated the cockroach populations in 20 homes within these five housing complexes. Then, following the instructions on the product labels to the letter, the team installed and “detonated” the bombs. The cockroach populations were re-examined two weeks and one month after the use of these devices. Overall, they had no significant impact on insects at all.

Once this was discovered, the team wanted to continue the study by evaluating the exposure to these substances of those who live in the apartments: people but also dogs, cats and other pets.

The team scrubbed the floors, kitchen surfaces, walls and cabinets of the houses before installing the bombs. Even before the treatment there were residues of insecticides in the apartments (the inhabitants had in fact used remedies to try to keep the infestation at bay). These, found mostly in the center of the floors and on kitchen surfaces, were considered base levels. The same areas were then washed four to six hours after using the insecticide bombs.

The team reports that residual insecticide levels increased an average of 600 times on all horizontal surfaces. And even a month after the study, the presence of these substances was still 34% higher than baseline levels.

The conclusion of the study was very clear. As lead author Zachary DeVries said:

“The insecticide bombs do not kill the cockroaches but they put the chemicals in places where the cockroaches are not there and increase the levels of pesticides in the home. In a cost-benefit analysis, you are getting all the costs and no benefits. "

These insecticide bombs are used not only for cockroaches but also for fleas and other insects. Given the results of this study, it is better to keep unwanted pets away from our homes with effective and harmless natural remedies for our health.

In this regard, read also:

add a comment of These insecticides are useless against cockroaches and cockroaches. They just poison us! I study