The vegetarian diet improves mental health and reduces the risk of diabetes. The new confirmation 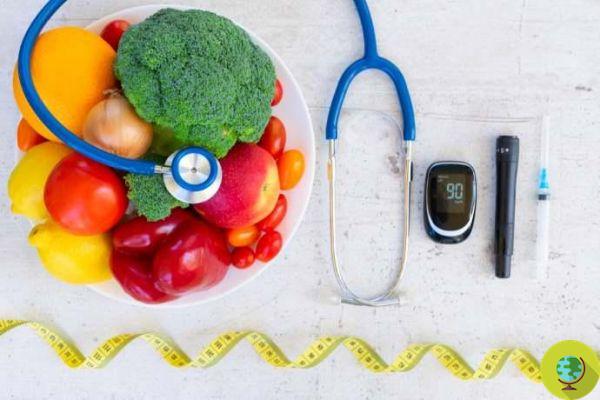 A predominantly plant-based diet helps to keep diabetes levels and associated diseases, such as depressive disorders, under control.

A vegan or vegetarian diet helps control diabetes and is good for the mood. The confirmation would come from a systematic review of 11 studies on the subject.


A Vegetarian diet (or a vegan diet) helps to keep diabetes levels and associated diseases, such as depressive disorders, under control, improving mood and psychophysical well-being.

According to a systematic review of 11 studies conducted by Anastasios Toumpanakis of the University of London, in fact, there is an association between plant-based diets and improvements in psychological well-being, quality of life and control of glycated hemoglobin (HbA1c) in populations with diabetes. .

Just like the American research that the vegetarian diet is best for diabetics and for weight loss, this review also compared a vegan or near-vegan diet with the recommended diets of the official diabetic associations and in all cases the plant-based diet was associated with better results.

To reach their conclusions, the British researchers carried out a “meta-analysis” selecting 11 studies already published for a total of 433 50-year-old diabetics all involved in clinical trials based on the comparison of different eating habits. In the trials considered in the meta-analysis, patients who followed predominantly vegetarian or vegan diets were compared with some control groups who did not have to follow restrictions on the consumption of foods of animal origin.

What emerged was that a predominantly vegetarian diet led to better management of the disease, which was also associated with a lower risk of depressive disorders. Furthermore, vegetarianism, as well as veganism, would also reduce the risk of complications such as neuropathy by slowing its progression.

Once again, therefore, it is highlighted that interventions on the food side, together with the fight against a sedentary lifestyle, are the most effective tools against certain pathologies. And it is confirmed that a diet with mainly plant-based foods improves well-being and mood, improves diabetes control and is associated with lower cholesterol levels.

add a comment of The vegetarian diet improves mental health and reduces the risk of diabetes. The new confirmation