The effects of particulate matter (PM2.5) and fine dust in your body

Particulate, also known as PM (Particulate matter). Tiny particles that we inhale from the polluted air of our cities. But what happens to our body when we breathe in the so-called fine particles, in particular PM2.5?

Particulate, also known as PM (Particulate matter). Tiny particles that we inhale from the polluted air of our cities. But what happens to our body when we breathe in the so-called fine particles, in particular PM2.5?


Particulate matter is one of the most dangerous pollutants and is made up of solid and liquid particles whose diameter ranges from a few nanometers up to 500 µm and beyond (that is, from billionths of a meter to half a millimeter). In the case of PM2.5, for example, the particles have a diameter of 2,5 μm.

More and more researchers have begun to pay attention to the link between respiratory diseases and air pollution in light of China's high levels of smog.

Unfortunately, PM with a diameter of 1 μm or less can remain in the atmosphere for several weeks and, as a result, can be freely transported by air currents. There are two ways to generate PM emissions. The first is to directly release the particles into the atmosphere, the second is to release its precursors, such as sulfur dioxide, ammonia, various nitrogen oxides and other elements that combine in the atmosphere. These elements come from liquid and solid fossil fuels, such as diesel engines, coal, lignite.

Effects of PM2.5 on our body

The effects that PM2.5 particles have on the human respiratory system are well documented. Although the severity of health risks usually depends on exposure, researchers have found that both PM10 and PM2.5 can cause lung cancer and various cardiovascular and respiratory diseases.

The most vulnerable groups are people with pre-existing heart or lung disease, children and the elderly.

Also of concern is the fact that there is no evidence to indicate the existence of a safe level of exposure. Researchers estimated that, globally, about 5% of the number of lung cancer deaths is attributed to PM. Also, one study of the World Health Organization has shown that exposure to PM2.5 reduces the life expectancy of the European population by 8,6 months on average.

How to know if the contracted diseases depend on exposure to fine dust?

It is possible to hypothesize this by analyzing the symptoms. Both heart and lung disease sufferers and healthy people may experience chest stiffness, shortness of breath, eye, nose and throat irritation. Over time, these can lead to health complications that can evolve into more serious problems. Furthermore, it must be borne in mind that children, the elderly and pregnant women are much more vulnerable to this type of pollution and should take extra precautions, particularly avoiding areas or wearing protective clothing or masks.

How can we reduce particulate matter in the world?

Particulate emissions can be reduced using current technologies but the effort needs to be global. The fact that PM2.5 can travel through our atmosphere means that if a country were to ignore the measures taken by other states, it could still suffer the effects of those produced in neighboring countries. 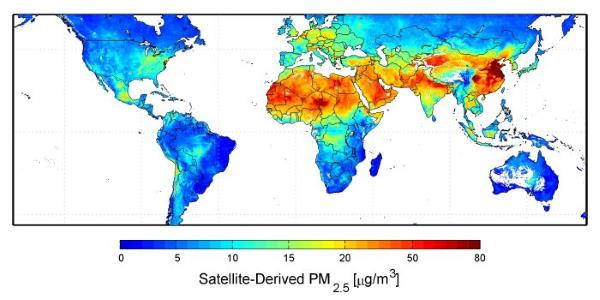 Even if the solution would be the application of unique rules worldwide, in our small way we can contribute to reducing the production of fine dust, starting for example from the choice of sustainable mobility, bicycles or public transport for travel, for food. 0 km and renewable energies.

add a comment of The effects of particulate matter (PM2.5) and fine dust in your body