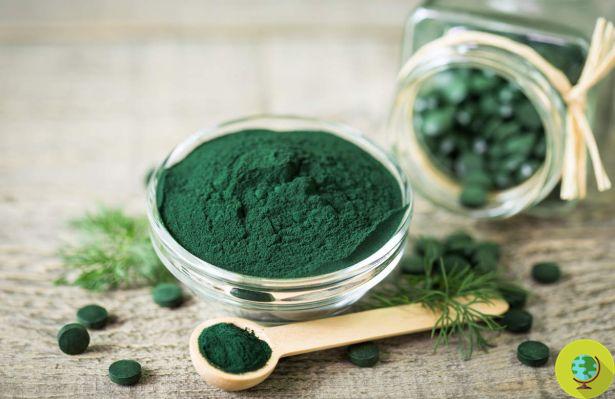 Spirulina is a superfood that however has some possible contraindications and side effects, especially if the doses are wrong

Spirulina is a superfood that however has some possible contraindications and side effects, especially if the doses are wrong


Spirulina, thanks to its many properties, is considered a real superfood. As always, however, even natural products can have contraindications and side effects, as well as interact with some drugs. So let's find out what to watch out for if we decide to take spirulina. (Read also: Spirulina algae: what happens to the body every day we take it)

Spirulina is a precious blue-green freshwater microalgae. Inside there are several active ingredients important for our health that make it a natural product particularly loved and used in different forms: tablets, powder to add to smoothies and other preparations, enriched foods (for example spirulina pasta) and much other.

Often, in the context of natural therapies, it is recommended to take it cyclically. But, as always, we should first know when to use it and when it would be better to avoid. It is best to inform your doctor that, knowing your medical history, he will immediately be able to understand if it is a good choice for you.

But now let's see what to look out for if we decide to take a spirulina or spirulina powder supplement.

Generally, in the absence of pathologies and not exaggerating with the doses, spirulina is a supplement that does not present particular side effects. But we must be careful to buy a quality and controlled product.

As is well known, in fact, heavy metals such as lead, arsenic and cadmium accumulate in algae when their growth environment is polluted. It is therefore good to opt for the purchase of a spirulina whose cultivation methods are strictly controlled. We can look for indications to this effect on the product label, or, if in doubt, contact the manufacturer directly.

The issue was also dealt with by the French Food Safety Agency (Anses) which in a report published a few years ago focused attention on the possible risk of allergies and contamination, underlining, among other things, that spirulina is not a reliable source of vitamin B12 for vegans as it is present in the seaweed mainly as an inactive component.

Read also: Spirulina algae: pay attention to where you buy and how much you take. The contraindications of Anses

Spirulina can also have a certain stimulating effect in some people, therefore it is better not to take it in the evening.

As for the possible side effects, however rare and often linked to taking an excessive dose, we could see various symptoms related to the detoxifying properties of spirulina such as:

To avoid this, it is enough to start with low doses, for example 1 gram per day, and then eventually gradually increase the dose after at least a week.

In fact, some people may be allergic to spirulina. According to a study, those with other allergies are more likely to react negatively to spirulina and to be safe they should avoid this supplement or consult their doctor before using it.

People who suffer from should consider very carefully with their doctor whether they are taking spirulina thyroid dysfunction (especially hyperthyroidism) or autoimmune diseases.

Even those affected by phenylchetonuria (amino acid metabolism disease) should avoid spirulina because it contains phenylalanine.

At the moment there are no known interactions of spirulina with drugs or herbs. As always, however, it is good to ask for the opinion of your doctor if you follow drug therapies.

add a comment of Spirulina: the side effects and contraindications you should know before using it