Heavy metals, toxic compounds, traces of psychotropic substances and highly pathogenic bacteria. A slew of dangerous components would be present in Herbalife supplements, among the best-selling in the world. The allegations concern some deaths related to liver failure in India.

Heavy metals, toxic compounds, traces of psychotropic substances and highly pathogenic bacteria. A slew of dangerous components would be present in Herbalife supplements, among the best-selling in the world. The accusations relate to some deaths related to liver failure in India.


In fact, an in-depth study highlights the clinical case of a 24-year-old woman with hypothyroidism and also highlights the dangers associated in general with food and dietary supplements, many of which promise results without a certain scientific basis.

Herbalife is a weight management supplement company that sells and markets nutritional and weight loss supplements under a multilevel marketing system. The United States Federal Trade Commission sentenced Herbalife® to pay $ 2016 million in 200 and ordered the company to restructure to comply with the law. According to the FTC, Herbalife® was "fooling consumers into believing that they could make substantial income from the business opportunity or from the large amount of retail sales of the company's products." Over the past few years, they have been reported different liver lesions associated with these supplements in different countries. On the other hand, theIndia it is fast becoming the largest growing market for this brand, which is forecast to surpass the United States in revenue.

The analysis, carried out by a pool of researchers from The Cochin Gastroenterology Group and the Ernakulam Medical Center of India, thus reports the first case of acute fatal liver failure from the Asia-Pacific region, in a young woman who consumed Herbalife products for 2 months. The 24-year-old woman was suffering from hypothyroidism and was taking thyroxine-based supplements, in these quantities: Formula 1 Shake Mix (two scoops a day with skim milk), personalized protein powder (two tablespoons a day twice a day in the Shake Mix) and Afresh Energy Drink (10 g twice a day). 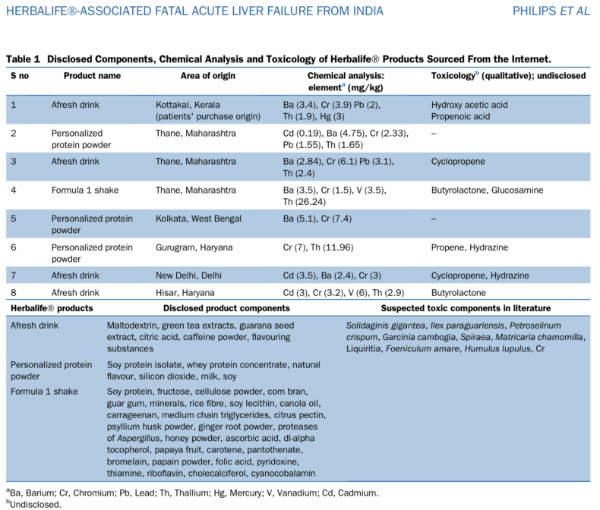 After 2 months, the woman developed a progressive loss of appetite, followed by jaundice, which worsened within twelve days. To make matters worse, liver injuries so severe that she was urgently transferred to a transplant center, but the girl died before the transplant.

The doctors then considered the possibility that Herbalife supplements contributed to the patient's liver damage and thus found one of those products from the same vendor (which also operated without a license and was then closed by the Department of Health and of Kerala Human Services) from which the woman had made the purchase. At the same time, they analyzed 8 products purchased from the web, subjecting them to analysis of heavy metals, toxicology and bacterial contamination studies.

"We found high levels of heavy metals in all Herbalife formulations and unspecified toxic compounds, including traces of psychotropic agent in 75% of the samples," the researchers explain. In the microbial analysis, several bacterial communities were revealed, including highly pathogenic species ”.

In addition, pathogenic bacteria (Proteobacteria and Cyanobattería) have been identified with the potential to cause liver lesions in 63% of the cases analyzed samples, including dangerous genera such as Escherichia, Klebsiella, Acinetobacter and Streptococcus.

Likely contributed to liver failure and the death of a 24-year-old woman, who took 3 Herbalife products for 2 months.https://t.co/iz37caqySQ

In short, a microbial detection of no small importance, which, according to experts, could also represent a serious threat to public health and, with repeated and long-term use, could lead to serious damage to organs.

It remains, from this study, the certainty that even nutritional supplements based on natural ingredients and of enormous consumption all over the world are incorrectly recognized as harmless and for this reason too easily marketed without adequate controls.

We reiterate, as we have done several times, not to use food supplements lightly, especially if you suffer from diseases or are already taking medications. Always ask an expert for advice.

THE REPLICA OF HERBALIFE, THE PRODUCTS ARE SAFE

On the other hand, Herbalife denies these results, sending us in reply the analyzes conducted by the Federation of the Indies Chamber of Commerce and Industry (FICCI) Research and Analysis Center (FRAC), an independent research and analysis center that adheres to all Indian and international standards, including which ISO / IEC17025.

From these data it is clear, unlike the study mentioned above, that the products are completely safe and in line with all the main standards (to consult the analysis pdf click here). 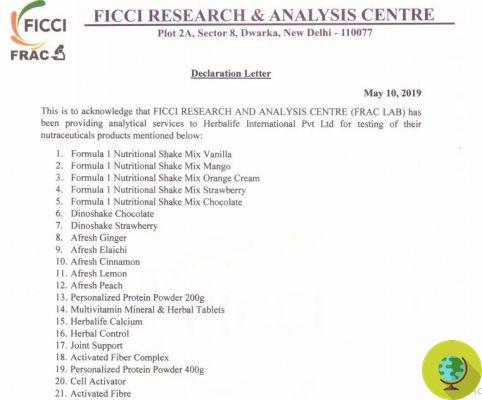 “Every day, millions of consumers around the world use Herbalife Nutrition products safely and we stand by the quality and safety of our products. All of our products and manufacturing procedures comply with government regulations in each of the 94 markets in which our products are sold and no hepatotoxins have ever been found in our products. In addition to our robust routine testing program in India, we have asked an independent and Government certified laboratory to test the products mentioned in the recent article and the results confirm that the products are completely safe and comply with all Indian government safety regulations. ".

Cold sores, how to prevent it and make it disappear ❯

add a comment of Herbalife, supplements cause liver failure. The study that accuses them