Codyceps: benefits and how to take the Chinese mushroom with a thousand properties 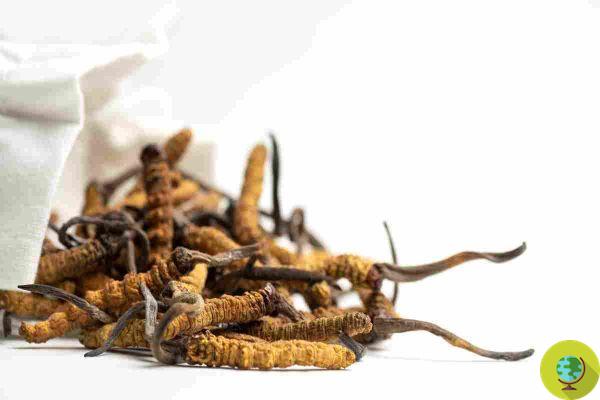 Cordyceps is a parasitic fungus that has been used in traditional Chinese medicine for centuries for its properties. Let's find out the benefits, uses and contraindications of this Chinese mushroom.

Il cordyceps is a genus of parasitic fungus that grows on insect larvae. When these fungi attack their host, they replace its tissue and sprout long, thin stems that grow outside the host's body.


The remains of the insect and fungi have been hand-picked, dried and used in traditional Chinese medicine for centuries as a natural remedy to treat fatigue, disease, kidney disease and low sex drive.

Today, supplements and products containing cordyceps extract have become increasingly popular due to their many purported health benefits.

Of the more than 400 species discovered, two have become the focus of research: Cordyceps sinensis and Cordyceps militaris. However, much of this research is limited, so experts cannot currently draw any conclusions regarding its use in humans.

It can increase performance during exercise

Cordyceps is thought to increase production by adenosine triphosphate (ATP) molecule, essential for providing energy to the muscles. This can improve the way the body uses oxygen, especially during exercise.

In one study, researchers tested their effects on exercise capacity in 30 healthy seniors using an exercise bike. Participants received 3 grams per day of a synthetic cordyceps strain, called CS-4, or a placebo pill for six weeks.

In a similar study, 20 healthy seniors received 1 gram of CS-4 or a placebo pill for 12 weeks. Although the researchers found no change in VO2 max in either group, participants who were given CS-4 improved physical performance.

Older people have traditionally used it to reduce fatigue and increase strength, as well as sexual desire. Researchers believe that the content of antioxidants may explain the potential anti-aging effect.

Several studies have found that it increases antioxidants, helping to improve memory and sexual function. However, more research is needed. (Read also: Antioxidants: Do you really know what they are, what foods to find them in and the best ones you should be taking every day?)

The potential of cordyceps of slow the growth of tumors has generated considerable interest in recent years. Researchers believe that these mushrooms can exert anticancer effects in several ways.

Studies have shown that it inhibits the growth of many types of human cancer cells, including i lung tumors, colon, skin and liver.

Additionally, it can also reverse the side effects associated with many forms of cancer therapy. One of these effects is leukopenia. Not to be confused with cancer leukemia, leukopenia is a condition in which the number of white blood cells (leukocytes) decreases, lowering the body's defenses and increasing the risk of infection.

One study tested the effects of cordyceps on subjects who developed it leukopenia after radiation and other chemotherapy treatments; Interestingly, she reversed leukopenia. These findings suggest that mushrooms may help reduce complications associated with some cancer treatments.

It can help manage type 2 diabetes

Cordyceps contains a special type of sugar that it can help cure diabetes. Interestingly, it can keep blood sugar levels within a healthy range by mimicking the action of insulin.

It has been shown in several studies to reduce sugar levels, and some evidence suggests it may also protect against kidney disease, a common complication of diabetes.

In a review of 22 studies involving 1.746 people with chronic kidney disease, those who took it cordyceps supplements they experienced better kidney function.

However, these findings are not conclusive. The authors stated that many of the studies were of low quality. Therefore, no conclusions could be drawn on renal function in humans with chronic kidney disease. (

Cordyceps is approved in China for the treatment of arrhythmia, a condition in which the heartbeat is too slow, too fast, or irregular. One study found that it significantly reduced heart injury.

The researchers attributed these findings to the content of adenosine, which is a naturally occurring compound that has heart-protecting effects.

It can help fight inflammation

Cordyceps is said to help fight inflammation, often the cause of heart disease and cancer.

Research has shown that when human cells are exposed to cordyceps, the special proteins that increase inflammation in the body are suppressed.

Thanks to these potential effects, researchers believe it can serve as a useful supplement or anti-inflammatory drug. Cordyceps can also have topical uses; one study found that it reduced skin inflammation when applied topically.

Cordyceps sinensis is difficult to harvest, for this reason, most supplements contain a synthetically grown version called Cordyceps CS-4.

Due to limited human research, there is no consensus on dosages. The commonly used dosage in human research is 1.000-3.000 mg per day.

Side effects and safety

No studies have yet examined the safety of cordyceps on humans. However, a long history of use in traditional Chinese medicine suggests that it is non-toxic. In fact, the Chinese government has approved Cordyceps CS-4 for use in hospitals and recognizes it as a natural and safe drug.

But in 1996, a Chinese researcher reported 2 cases of lead poisoning attributable to the consumption of cordyceps 17. It is therefore preferable to favor products subject to strict quality controls. Among side effects There have been a few reported cases of dry mouth, rash, drowsiness, nausea and diarrhea.

add a comment of Codyceps: benefits and how to take the Chinese mushroom with a thousand properties