Rice is becoming less and less nutritious: CO2 is to blame 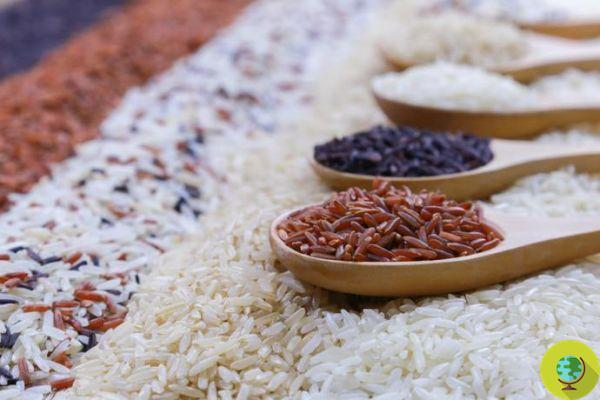 The increase of carbon dioxide in the atmosphere will reduce the nutritional value of the rice. In addition to the more well-known damages related to air pollution, CO2 also damages what we eat

The increase of carbon dioxide in the atmosphere will reduce the nutritional value of the rice. In addition to the more well-known damages related to air pollution, CO2 also damages what we eat.


This was confirmed by a research team from the University of Tokyo that examined a series of samples. According to what emerged from the analyzes, iron, zinc, proteins and vitamins B1, B2, B5 and B9 will be present in reduced levels in rice grown in areas and periods characterized by higher concentrations of carbon dioxide. This is what will happen in the second half of this century, when the estimated CO2 will be 568 to 590 parts per million.

"Rice is not only an important source of calories, but also of protein and vitamins for many people in developing countries and for poorer communities in developed countries," said Professor Kazuhiko Kobayashi of the University of Tokyo. co-author of the recent study.

People living in countries with the highest rice consumption and the lowest gross domestic product may become malnourished if the nutritional value of low-cost staple foods decreases.

For the study, 18 varieties of rice have been grown in outdoor research sites in China and Japan. In the fields, above the plants, the researchers built plastic octagons 17 meters wide and about 30 centimeters high. Air with higher concentrations of carbon dioxide, equal to what we will breathe in the second half of this century (568 to 590 parts per million), has been blown through plastic pipes onto plants. A network of sensors and monitors then measured wind speed and direction to determine the amount of carbon dioxide released. This is a technique known as Free-Air Carbon dioxide Enrichment (FACE).

"This technique allows us to test the effects of higher carbon dioxide concentrations on plants growing under the same conditions that farmers will actually grow them decades later," said Kobayashi.

After the treatment, the researchers analyzed the 18 different rice varieties by examining the levels of protein, iron and zinc, 9 varieties grown in China were used for the analyzes of vitamin B1, B2, B5 and B9. A significant reduction (on average of -10,3%) in proteins was observed for all rice cultivars. There were also significant reductions in iron (Fe) and zinc (Zn) (-8,0 and -5,1%).

Regarding the vitamin B complex, significant reductions in vitamins B1 (thiamine), B2 (riboflavin), B5 (pantothenic acid) and B9 (folate) were observed in response to expected CO2 levels with average drops between cultivars of - 17,1, -16,6, -12,7 and -30,3%. The only increase was recorded for vitamin E.

About 600 million people, mainly in Bangladesh, Cambodia, Indonesia, the Lao People's Democratic Republic, Myanmar, Vietnam and Madagascar, derive at least 50% of their daily energy and protein directly from rice.

The rice varieties chosen reflect a wide genotypic and phenological range, suggesting that the observed decline in nutritional parameters is representative of rice as a whole. Thankfully, not all varieties have responded equally, so future research projects may focus on studying types of rice that can keep their nutrients intact despite pollution.

Reducing CO2 should actually be the solution but at these rates we will hardly be able to free our air and our dishes from the poisons we keep pouring out.

The study was published in Science Advances.

The return of the coronavirus to Singapore launches an alert to the rest of the world: we cannot let our guard down ❯

add a comment of Rice is becoming less and less nutritious: CO2 is to blame