Pregnancy: If you suffer from nausea, the risk of miscarriage decreases 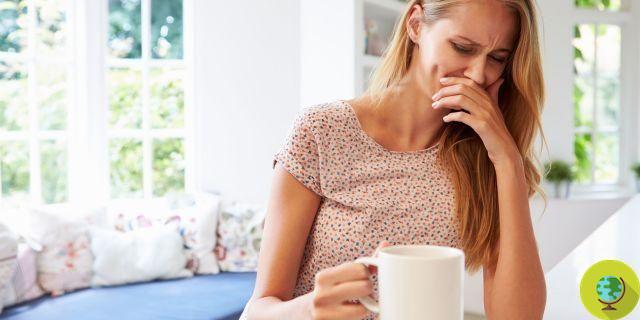 According to a new study, women who experience nausea and vomiting during pregnancy are less likely to have miscarriages.

Women who experience nausea and vomiting during pregnancy are less likely to have miscarriages. This is what it establishes an authoritative study, which appeared in JAMA Internal Medicine, which published an analysis carried out by a group of researchers from the Eunice Kennedy Shriver National Institute of Child Health and Human Development (NICHD) of the National Institutes of Health (NIH) (Maryland, USA), together with other institutes.


That nausea that you would give away even the soul, that unpleasant sensation that closes your stomach and makes you wrinkle your nose in front of (even) the most magnificent cup of coffee, all in all it's not that bad. Or at least for the signal it seems to carry with it.

OUR OFFICE - The scholars used the data collected for another study, the Effects of Aspirin in Gestation and Reproduction (EAGeR) test, in which the possible effects of aspirin in the prevention of abortion.

797 women who tested positive for pregnancy tests were examined, of which 188 were unable to complete gestation. They all had to fill in some sort of daily diary about their health status and had to answer a monthly questionnaire. At the eighth week of gestation, 57,3% of women reported suffering from nausea, while in 26,6% of cases nausea was added to vomiting. And pooling the data the researchers found they all had 50% to 75% in less likely to lose the baby.

"It is a common thought that nausea indicates a healthy pregnancy, but so far there was not much high-quality evidence to support this belief," explains Stefanie N. Hinkle of the NICHD. Our study evaluates symptoms from the first weeks of pregnancy, immediately after conception, and confirms that there is a protective association between nausea and vomiting and a lower risk of pregnancy loss ”.

Let's keep this nausea, a symptom of pregnancy, then, especially now that we know it would be one essential condition to guarantee the health of the fetus, and maybe we look for the natural remedy that is best for us!

Graviola: contraindications and side effects ❯

add a comment of Pregnancy: If you suffer from nausea, the risk of miscarriage decreases