Pfas: with a “boomerang” effect they pass from the waves of the sea to the land, according to a new study 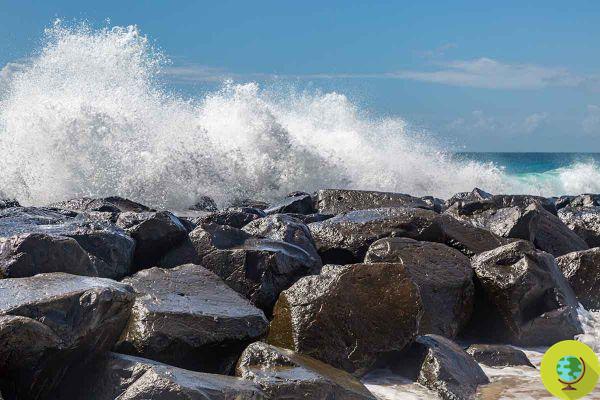 A new study has found that, with a sort of boomerang effect, the Pfas present in the sea pass from the waves to the land

Pfas, or "forever chemicals" as they are defined in the US, can now be found really everywhere. A new study shows how they can return to land from the sea - with a kind of "boomerang" effect - through the waves.


Unfortunately, even the waves of the sea contain Pfas and breaking on the shore can make these substances return from the sea to the land. A new study, published in Environmental Science & Technology, has found this out.

The mechanism was initially thought to be different, as Matthew Salter, one of the study's authors, a researcher at Stockholm University's Department of Environmental Sciences, stated in an interview:

The common belief was that PFAS would end up in the oceans where they would remain to be diluted over the course of decades. But it turns out that there is a boomerang effect, and some of the toxic PFAS are re-emitted into the air, carried over long distances, and then deposited back to earth.

Pfas, as we now know, are polluting and dangerous chemicals: they take a long time to degrade in the environment and are potentially harmful to human health. They have in fact been linked to reproductive and developmental problems, some types of cancer, immune or hormonal disorders and much more.

Scientists continue to study the ways in which we can be exposed to such chemicals, and this latest research shows that, even at sea, we cannot rest assured. But on the other hand, as we said at the beginning, Pfas are unfortunately now everywhere and have also been found in mother's milk as well as in the air inside homes. Read also: Pfas in breast milk: new study shows universal and very worrying contamination)

The new study now shows how these substances can also pollute the outside air, at least along the coast. In practice, the Pfas would be able to "return to shore" thanks to the waves which, when they break, re-emit these compounds into the air.

In order to state this, the research team collected, between 2018 and 2020, more than 100 air samples from two beach locations in Norway: Andøya, an Arctic island in the Vesterålen archipelago, and Birkenes, a municipality located along the southernmost tip of Norway.

The samples were then analyzed to see if there were any traces of 11 Pfas and it turned out that they were all contaminated. We also wanted to verify the presence in the air of sodium ions (which are an aerosol indicator of marine spray), discovering that high levels of ions tended to correlate with high levels of Pfas.

This concretely means that the Pfas could be able to reach land thanks to aerosols, waves and sprays from the sea, which should therefore be considered to all intents and purposes sources of pollution in coastal communities.

The results suggest that the transport of these compounds:

it can impact large areas of inner Europe and other continents as well as coastal areas.

In the study, the researchers calculated that the oceans could release 284 to 756 U.S. tons of eight types of Pfas each year. A source of contamination that, according to experts, could pollute more than air.

It is possible that PFAS deposited in the atmosphere could contaminate coastal drinking water sources for the foreseeable future. Our study gives a new dimension to the meaning of the term chemicals forever - said Ian Cousins.

Read all our articles on Pfas.

Peti health spies: here's what they reveal about your gut ❯

add a comment of Pfas: with a “boomerang” effect they pass from the waves of the sea to the land, according to a new study