Paleo diet: how it works, weekly menu scheme, what to eat and CONTRAINDICATIONS

The Paleolithic Diet (Paleo Diet or Paleodieta) is a diet that is as fashionable as it is discussed. Let's find out what he recommends to eat and the contraindications to which those who follow this diet for too long can go against.

How does the paleo diet, what to eat, the outline of the weekly menu and the nutritionist's opinion on this diet that has become very fashionable


La Paleolithic diet (Paleo diet or Paleodieta) is a diet that is as fashionable as it is discussed. Let's find out what he recommends to eat and the contraindications to which those who follow this diet for too long can go against.

The Paleodiet was conceived by Loren Cordain, a nutritionist at the University of Colorado passionate about foodpaleolithic era. The men of the Stone Age basically lived on hunting and fishing, in fact they did not yet practice agriculture or breeding and ate only meat, berries, fruit and vegetables, or what they managed to get during the day by hunting and gathering.

Even today, according to those who promote this diet, we should follow such a composed diet. In fact, we would all be programmed, like our ancestors, to feed us in particular of animal proteins beyond that of vegetables and fruit.

Paleo diet, how it works

The Paleo Diet is based on the idea that even modern men should eat as they did in the distant past, this is not just to secure the ideal weight but also to stay healthy.

To feel good, according to Cordain, it is necessary to follow a diet that is very rich in animal proteins in which carbohydrates are completely excluded except those contained in fruits and vegetables. It is also important to associate with the Paleolithic diet of regular physical activityIn fact, our ancestors were certainly not sedentary since they had to get the food they needed every day with difficulty, not being able to buy it comfortably in markets or supermarkets.

According to the creator, it would be a very simple diet to follow and always suitable, therefore not only in case you want to lose weight.

However, many nutritionists do not think so and see this type of high-protein diet as a potential health risk, especially if followed for long periods.

But let's see now in more detail what you can eat and what are the foods to avoid according to this diet.

Paleo diet, what to eat?

The paleo diet allows you to eat only the foods that existed in the Paleolithic era therefore: meat (especially lean), fish, crustaceans and molluscs, vegetables, seeds, roots, berries, fruit and honey. Very rarely you can drink alcohol and consume condiments such as oil. Also allowed tea and coffee.

However, all types of cereals, legumes, milk and dairy products should be avoided, salt, sugar, oil, butter, all processed foods and beer.

To recap the Paleo diet recommends consuming above all:

Instead, we advise against taking:

To get an idea of ​​how the different foods should be divided and which ones you should consume the most, take a look at Paleo Diet food pyramid. 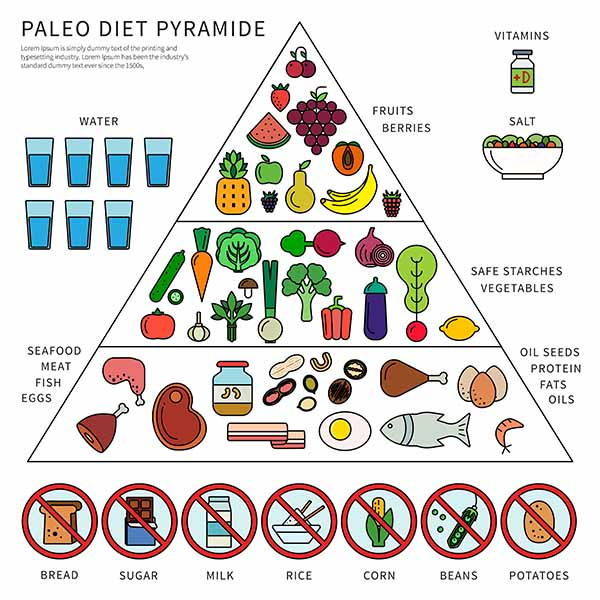 We offer you a weekly menu of the Paleo diet only by way of example. If you want to lose weight or learn how to stay healthy through proper nutrition, we recommend as always consult an expert.

Lunch: omelette with salad and tomatoes

Price: vegetable soup with cold cuts of your choice

Breakfast: fruit smoothie with coconut milk or vegetable drink made from dried fruit

There are no snacks but if you feel hungry you can eat dried fruit or cold cuts. 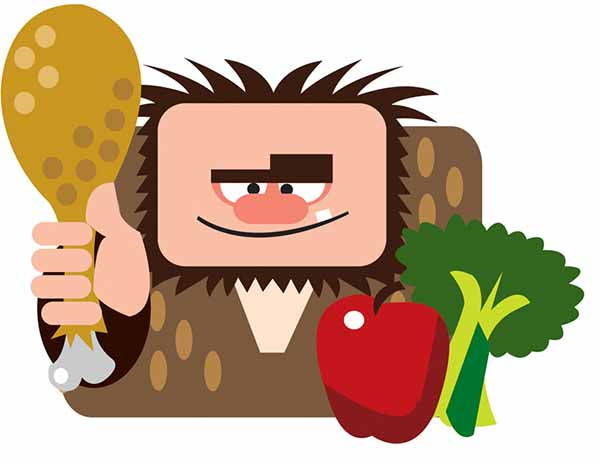 The contraindications of the paleo diet are substantially those of the other high-protein diets that they almost completely eliminate important nutrients such as carbohydrates and therefore they are not balanced and do not instill a correct dietary education. Harmful effects are found in the long run kidneys and liver forced to dispose of too many substances deriving from the metabolism of animal proteins, especially uric acid.

To be avoided absolutely if you already suffer from kidney and / or liver problems. Headaches, mood disorders as well as an increase in cholesterol and triglycerides may also appear.

Often then diets like this have the disadvantage that, as soon as you return to previous eating habits, you tend to be prey to the so-called effetto yo-yo, that is, the weight lost is recovered in a short time.

Absolutely not recommended during pregnancy and breastfeeding.

You may also be interested in the following diets:

Paleo diet, the opinion of the expert

We asked Enrica Bovio, nutritionist biologist and molecular biologist, an opinion on the Paleo diet. Here's what he told us:

“The Paleolithic diet, also known by other names such as paleo diet or cave diet, assumes a return to a diet prior to the introduction of agriculture and livestock, therefore given by hunting, fishing and gathering activities. This diet would be the one for which man was 'programmed' in the Paleolithic and would still be valid (neglecting a few thousand years of genetic, technological, cultural changes). According to the supporters of the paleo diet it would be necessary to return to a more 'primitive' menu ”.

What foods are allowed and what are forbidden?

“The variants of the Paleolithic diet are many, with varying levels of exclusion of certain foods. Basically you can eat vegetables, fruit, lean meat, fish, crustaceans, molluscs, eggs, dried fruit, spices, seeds, sometimes different types of oils, tea and coffee are allowed but not in all the variants of this diet. Then there are foods that can be consumed more sporadically such as dehydrated fruit, fatty cuts of meat, potatoes, honey. Finally, among the prohibited foods we have all types of cereals, legumes and all dairy products, sugar, salt, canned foods and in general processed foods and alcohol. These exclusions are due to the 'belief' that these products are harmful to health and when it comes to sugars, salt, alcohol, the main guidelines for proper nutrition indicate limiting their use. In this diet, however, we also eliminate fundamental components for our diet such as cereals, legumes, milk and derivatives, whose role is very important in other diets based on solid scientific bases such as the DASH diet and the Mediterranean ".

Is it a balanced diet?

“No, in a single instant we take away half of the food groups available to us with a diet that is clearly high protein, with most of the proteins obtained from meat because we exclude both milk and legumes and hypoglucides because we no longer have cereals but only fruit and vegetables from which to obtain carbohydrates. The Paleolithic diet is not the first high-protein and low-glucose diet, other examples are the Atkins, Dukan and South Beach diets. "

Is it a scientifically sound diet?

"I think it is not possible to say precisely what the diet of our ancestors was given the vastness of the earth and the climates there will have been different types of plants and animals according to the places and seasons. Another point to consider is that fruit and vegetables are no longer what they were then, what we buy at the supermarket is the result of a selection of species made by man over the millennia. Fruits and vegetables have a fiber, vitamin, mineral and sugar content that is not comparable to that of thousands of years ago. Meat is different and it is recommended that you prefer that of grass-fed animals. I challenge you to find it in the supermarket so easily and at an affordable price. It must also be considered that the ancestors ate game, not farm animals whose meat is completely different in terms of macronutrients and micronutrients. Fish, molluscs and crustaceans were certainly not farmed at the time and our seas were not so polluted. Improper nutrition can contribute to the onset of various chronic diseases including diabetes but there are not enough data to indicate the Paleolithic diet as the perfect diet to follow to stay healthy as primitive men (who are hypothesized to follow a similar diet) certainly did not have today's life expectancy and therefore they could hardly run into pathologies easier to find with old age. Encouraging results have been obtained following the paleo regimen but must be interpreted with caution because the scientific studies carried out had case studies and a limited duration and were very heterogeneous, contrary to the studies made on the DASH or Mediterranean diet, which involved thousands of people followed for a long period of time ".

Would you feel like recommending it? Are there any contraindications?

"The Paleolithic diet is very popular and controversial, I would not recommend it because it is not balanced and offers little variety and for this reason, despite the good initial weight loss due to the extreme reduction of carbohydrates and the satiating power of meat, there is a tendency to abandon it and therefore to regain the weight lost. This diet is also expensive and if you really want to start it you need excellent health conditions, it should not be followed for more than a month and do-it-yourself should be avoided. Being an excessively high protein diet there may be side effects typical of a high protein diet and the lack of milk and dairy products could lead to a calcium deficiency. I would recommend choosing other alternatives to the paleo diet with the nutritionist, for example the Mediterranean diet or the DASH diet, which are safer and with proven health benefits ".

Diet for hypertension: the vegetable you should eat every day to lower blood pressure ❯

add a comment of Paleo diet: how it works, weekly menu scheme, what to eat and CONTRAINDICATIONS