Nuts: Reduces the risk of pancreatic cancer in women 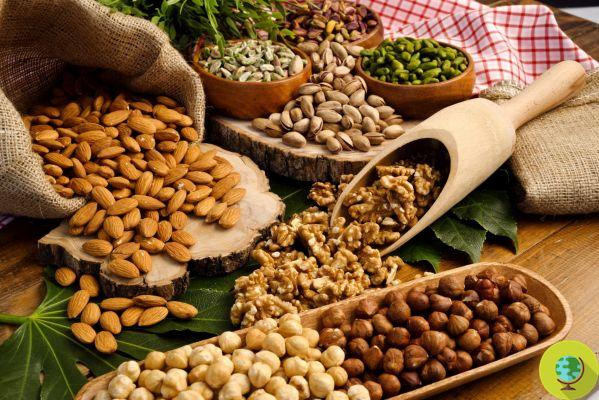 Consuming moderate amounts of nuts reduces the risk of pancreatic cancer. A research carried out on over 75 thousand women ...


Il pancreatic cancer it is one of the cancers with the highest mortality rate, which is why it is important prevent it. How? For example by eating more often dried fruit.

Almonds, walnuts, hazelnuts, pine nuts, pistachios and all the rest of dried fruit in fact, according to researchers from the Department of Medicine, Brigham and Women's Hospital and Harvard Medical School (the same ones who discovered that chocolate makes you lose weight), it would be can reduce the risk of pancreatic cancer.

To arrive at this conclusion the researchers analyzed over 75 women (none with a history of cancer) paying particular attention to the relationship between the risk of contracting cancer and the consumption of dried fruit. What emerged was that the women they consumed approx 28 grams of dried fruit during the week, they saw significantly lower risk of getting pancreatic cancer, compared to those who did not have this habit.

But what particularly struck the researchers was the fact that, as research team leader Ying Bao pointed out: “Risk reduction was independent of established or presumed risk factors for pancreatic cancer including age, height, obesity, physical activity, smoking, diabetes and other dietary factors ”.

Later also confirmed by this research that dried fruit does not make you fat as is commonly believed but on the contrary, the women who ate more walnuts, hazelnuts, almonds etc. they were the ones that weighed the least.

Dried fruit: properties, calories and which one to choose ❯

add a comment of Nuts: Reduces the risk of pancreatic cancer in women