Monosodium Glutamate: Is It Really Bad? The expert's opinion

We all know, at least by name, the additive monosodium glutamate (MSG) present in many commonly used foods. Is this substance natural? Can it harm your health?

We all know, at least by name, monosodium glutamate (MSG) additive present in many commonly used foods. Is this substance natural? Can it harm your health?


After talking about caramel E150, let's continue our journey to discover the most used additives in the food industry to understand if and how dangerous they can be for our health. We focus on today one of the best known and most discussed: glutamate!

It is a salt composed of sodium and glutamic acid (amino acid naturally present in many foods) used as seasoning from the food industry with the aim of making some types of packaged foods more palatable. It is probably one of the most used additives ever and practically omnipresent especially when you want to mask the flavor of foods that in themselves would not have much.

It should also be noted that while previously glutamate was extracted from natural substances (for example algae) today it is preferred to reproduce it in a chemical way. It is evident that it is a substance that is used only for the purpose of alter the true taste of food and therefore absolutely not necessary if there were quality foods at the base. Moreover the risk is to get used to certain flavors and to change one's perception of taste that will require increasingly salty and tasty foods.

There is a lot of talk about monosodium glutamate even with respect to yours possible health effects. There are those who attribute the so-called "Chinese restaurant syndrome"Or the appearance, in some particularly sensitive people, of symptoms such as headache, nausea, difficulty in breathing and redness after excessive glutamate intake (for example following lunches or dinners in Chinese restaurants).

Many researches have also evaluated other consequences of a constant consumption of this substance, hypothesizing a correlation with a greater risk of obesity, intolerances, allergies and the appearance of some degenerative diseases. All still to be confirmed but if in doubt, better know exactly where it can be added glutamate to limit consumption as much as possible or avoid it altogether. 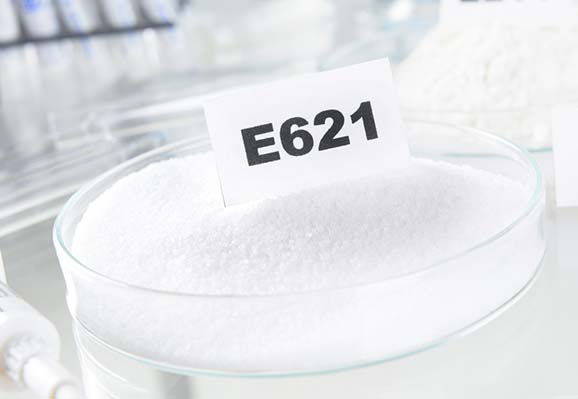 Glutamate: where it is found

Glutamate, which it may also appear on the label with the code E621, is mainly present in:

This is a non-exhaustive list. Always read the labels of what you buy to check whether or not there is glutamate or other food additives.

To find out more about monosodium glutamate and understand if it is really dangerous for our health, we asked Veronica Di Gaetano, Nutritionist Biologist and Food Technologist, for an opinion. Here is what she told us:

What is glutamate and what is it used for?

“Monosodium glutamate (GMS) falls within the sphere of food additives. It is basically the sodium salt of glutamic acid, a natural amino acid found in many foods. Over time, however, due to the high demand for this additive, it ended up producing it synthetically. It is used a lot in the food industries as a flavor enhancer since makes the packaged food tastier on the consumer's palate thus allowing the use of raw materials that are not necessarily of quality and a reduction in production costs compared to products that do not have it ".

In which foods do we find it most and how is it indicated on the label?

"We find it under the heading E621 in many food preparations such as nuts, in spice mixtures, in freeze-dried and canned soups, in salad dressings and in meat or fish based products, in baked goods, ready meals, snacks and also in frozen foods. We often find it in dressings and sauces and in some countries it is used as a table dressing".

Is it really dangerous, is there any scientific evidence for it?

“Together with aspartame this substance has been the subject of numerous studies to verify whether it is harmful to health. Some studies have evaluated excitotoxicity. Excitotoxins are typically amino acids that react with neural receptors in such a way that they destroy certain types of brain cells. An example of an excitotoxin is glutamate, whose concentration in the body, if it exceeds a certain threshold, is toxic. However, WHO has not set an acceptable daily dose, and there is no evidence that glutamate is absolutely safe. One thing is certain is that some companies for the latter reason have eliminated the additive in question from their products and that the European community has prohibited the use of GMS in baby products ".

On food additives you may also be interested in:

How can we avoid it or replace it?

“GMS, a bit like salt, should be introduced sparingly in packaged foods. Especially for those who use it a lot, there is always the rule not to ingest too many packaged foods in the space of a day, to avoid becoming overloaded with the substance. We remember that it is always the dose that makes the poison. Apart from this recommendation it is easy to avoid it, just a little more attention in reading the label knowing that if we do not find explicitly the written monosodium glutamate it could be written E621. We must then remember the need to get used to eating less salty. In this way, in 15 days our palate is reset and the new habit of a sweeter taste takes over and then we can make the dishes tastier by using food combinations that provide for a sweet and salty compensation, in order to avoid the salt itself, for example by using more seasoned cheeses or olives, capers in salads that have a higher concentration of salt, fish that is naturally salty or use sauces such as shoyu, tamari or gomasio, a mixture of sesame and salt, a combination that allows you to reduce the amount of salt since sesame enhances the sensation of salty. In other situations you can use nutritional yeast, for example it is very good on spaghetti with tomatoes and for those who eat meat, combine food with the meat itself to reduce the introduction of salt. Finally, I remember that if we get a sweet-sour taste in the kitchen, we reduce the salty sensation in the mouth ".

add a comment of Monosodium Glutamate: Is It Really Bad? The expert's opinion