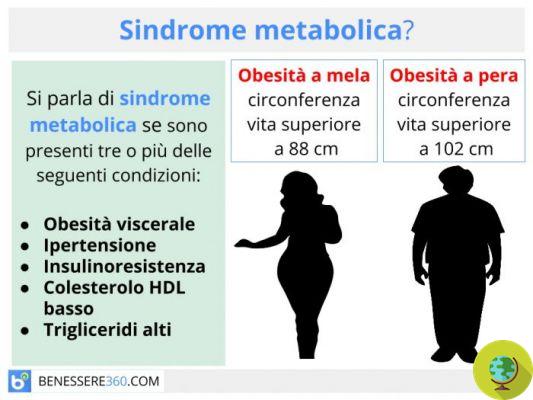 What is metabolic syndrome, what are the symptoms and what are the consequences? How to recognize it and how to intervene in case of insulin resistance

Don't store avocado like this: it's dangerous metabolic syndrome, what are the symptoms and what are the consequences? How recognize it and how to intervene in case of insulin resistance

La metabolic syndrome (or less known by the definitions of syndrome X, insulin resistance syndrome or Reaven's syndrome) is the set of multiple predisposing factors which place those who are subjected to a higher risk range for diseases such as diabetes, cardiovascular problems and hepatic steatosis (the most common "fatty liver"). Basically, it is a mix of elements that contribute to increase the possibility of developing diabetes and diseases affecting the circulatory system. But what are the symptoms of a metabolic syndrome? Why should you care and what are the remedies for insulin resistance?

La prevalence of the metabolic syndrome it concerns the adult population, with percentages that increase in the elderly age groups, and its causes are to be found in a combination of incorrect habits (wrong diet and poor physical activity) and family predisposition. All factors that involve the accumulation of abdominal fat, insulin resistance, dyslipidemia and arterial hypertension.

The prevalence of the syndrome, however, varies widely, since it seems to depend on age, ethnic group, various degrees of obesity and the predisposition to develop type 2 diabetes mellitus.

What is metabolic syndrome?

Of course, the more conditions you have, the more likely you are to develop metabolic syndrome.

In addition, it is clear that the risk of developing metabolic syndrome increases

A condition that also has its alarm bells in:

Given the complexity of the syndrome itself, it is clear that the causes are manifold. The most common ones are undoubtedly an unbalanced diet, insulin resistance (an element responsible for the propensity to diabetes, hypertriglyceridemia, hypertension), obesity, genetic predisposition and sedentary. These risk factors can also occur separately, but often tend to occur together.

In summary, among the causes of metabolic syndrome appear:

If you believe you are predisposed to metabolic syndrome, the first step is to contact your doctor, who will surely aim to increase your physical activity and reduce your body weight.

If there is one thing to do in the fight against metabolic syndrome, in fact, it is prevent it at the table and with more adequate lifestyles.

Regular daily physical activity, in fact, has benefits in the treatment of metabolic syndrome:

Well, the metabolic syndrome is probably mainly due to the condition of insulin resistance.

If in normal health conditions, the digestive system divides some of the foods we eat into sugar (glucose) which is then transported by the blood to the various body tissues where cells use it as an "energy substrate" making it enter with the help of insulin, in situations of "insulin resistance" the cells are unable to do so and glucose cannot enter. Our body reacts like this releasing more and more insulin to help glucose enter cells, but the result is only excessive insulin and glucose levels in the blood. From here, the levels of triglycerides and other lipids in the blood increase and also disrupts the work of the kidneys, causing an increase in blood pressure.

These "insulin resistance" effects increase the risk of developing heart disease, stroke, diabetes and other conditions.

It is true, however, that insulin resistance can be cured or even less can be kept at bay very easily. Correcting your diet, and consequently losing weight, is the first fundamental step to take.

Foods to be preferred

Foods that have a low glycemic index:

On the other hand, foods that can cause a sharp rise in the blood sugar level should be avoided:

Finally, herbal teas that promote lowering of blood sugar levels are very useful, based on:

add a comment of Metabolic syndrome: symptoms, causes and remedies for insulin resistance