Mascherine, a professor's experiment that shows what they are really for 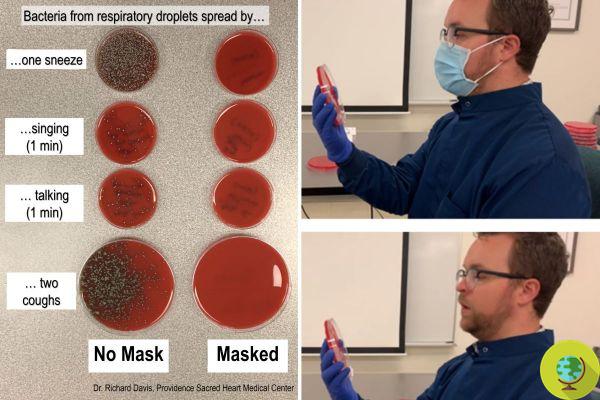 “What does a mask do? She blocks the respiratory droplets coming from the mouth and throat ”. It almost seems obvious as we have heard it repeated many times in recent months but now an American professor has conducted an experiment that really shows how effective the use of the mask is to defend against pathogens.


A test, that of Professor Richard Davis, which is enjoying great success and at the time of writing it has been retweeted by almost 200 thousand people. Davis is no ordinary person but he is director of the clinical microbiology laboratory at Providence Sacred Heart Medical Center in Spokane, Washington.

With a simple experiment, understandable by all, he managed to show how important it is to use the mask. In the test Davis wore a simple surgical mask and sneezed, coughed, sang and spoke by placing four different plates in front of his mouth. Then he repeated the operations without wearing the protective device:

“Two simple examples. In the first: I sneezed, sang, talked and coughed into an agar culture plate with or without a mask. Colonies of bacteria show where the droplets have fallen. A mask basically blocks them, ”she writes on Twitter.

The results of his test are truly eloquent. In the plates used without the mask, a large amount of bacteria is detected especially when coughing and sneezing but they are also present in the plates towards which the prof. Davis sang and talked.

What does a mask do? Blocks respiratory droplets coming from your mouth and throat.

First, I sneezed, sang, talked & coughed toward an agar culture plate with or without a mask. Bacteria colonies show where droplets landed. A mask blocks virtually all of them. pic.twitter.com/ETUD9DFmgU

It must be said that in the experiment there is no mention of coronaviruses, but it speaks of bacteria, which are quite another thing, but there is no doubt that the mask is also useful in countering the spread of Covid-19. Davis himself found himself having to respond to dozens of comments on social media, clarifying:

“Bacteria are incredibly different from viruses. But since it is believed that Covid-19 spreads mainly through droplets, I use the presence of bacteria in the droplets to show where they are going ".

Ispra: "too many masks and gloves on the street and on the beach". The largest virus on Earth is the human being

add a comment of Mascherine, a professor's experiment that shows what they are really for