Intermittent fasting: Does not help with weight loss and can lead to muscle loss. The study that distorts everything 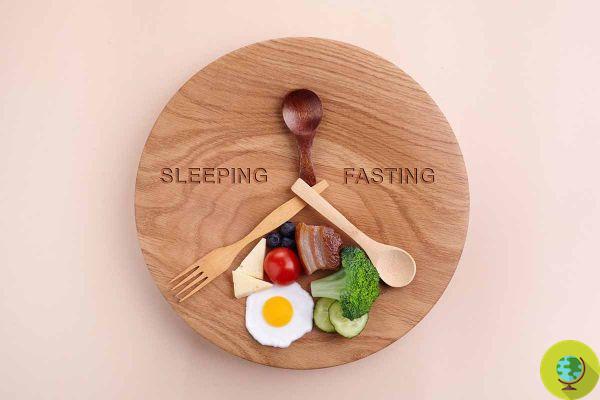 After a series of researches that have highlighted the advantages of practicing the intermittent fasting diet, now comes a study that instead highlights some critical points. According to a team from the University of California San Francisco (UCSF), this diet does not facilitate weight loss and, in addition, can lead to muscle loss.


Intermittent fasting, in which you are allowed to eat only in a specific amount of time (usually 8 hours a day), has been very popular in recent times, given the various health benefits it promises, including improving metabolism, promoting weight loss, increase energy and more.

However, research has recently been published that questions the benefits of this food practice a little, focusing rather on the disadvantages.

To lead it was Ethan Weiss, a cardiologist at the University of California, San Francisco, which published the results obtained in the magazine Jama.

The study, which was conducted for 12 weeks out of 116 overweight people, found no substantial difference in the weight loss of people who had limited food consumption in a specific amount of time (8 hours between noon and 20) compared to those who could eat regularly throughout the day.

Time-limited consumption was associated with a modest decrease (1,17%) in weight that was not significantly different from the decrease achieved by the control group (0,75%).

According to the study, there may also be a potential downside to intermittent fasting. A smaller percentage of participants were asked by the researchers to come in attendance for more advanced testing, including assessing changes in fat mass, lean mass, fasting glucose, and more. Through these measurements, the researchers found that people who followed intermittent fasting seemed to lose more muscle mass compared to the control group. Weiss says the result isn't definitive, but he hopes to conduct further studies to confirm this too.

Another surprise: there was no significant difference between the groups in health indicators such as blood pressure, triglyceride levels, cholesterol, glucose or insulin.

The doctor concluded that intermittent fasting is not conducive to weight loss and that previous research, having referred to experiments conducted primarily on mice and not on people, had come to incorrect conclusions. In fact, many studies, just like that of Professor Weiss, have been conducted by selecting a sample of volunteers and arriving at results opposite to his.

However, the American doctor is right to warn that this type of diet may not be suitable for everyone and, also for this reason, it does not lead to the hoped-for benefits. Weiss points out that more studies are needed to show whether intermittent fasting is safe for people over 60 or those with chronic ailments such as diabetes or those on medication.

Weiss suggests that the placebo effect may have caused weight loss in both groups: Many people, when enrolled in a nutrition study, pay more attention to what they eat, which means they are more likely to make healthy food choices. .

However, the American doctor is not yet ready to completely eliminate intermittent fasting from possible food choices: in fact, there could be benefits if practiced at other times of the day. Weiss's study looked at the results of participants eliminating food early in the morning but did not study for example the effects of skipping meals in the late afternoon or at other times of the day.

Intermittent fasting: It is not necessary to lose weight and can cause you to lose muscle mass. Confirmation in a new study ❯

add a comment of Intermittent fasting: Does not help with weight loss and can lead to muscle loss. The study that distorts everything