Household Cleaning: Chemical cleaners are as bad as 20 cigarettes a day 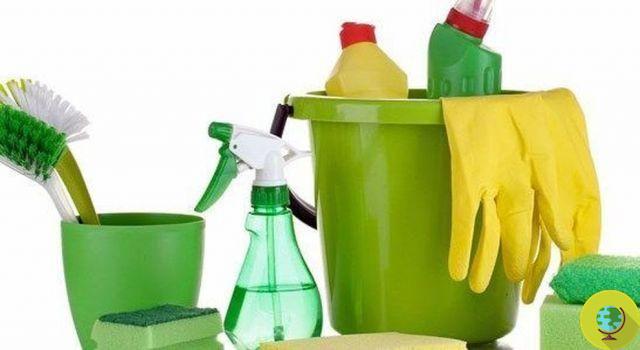 According to a new study, women who work as cleaners or regularly use cleaning sprays or other cleaning products at home have a greater decline in lung function.

Cleaning the house or smoking 20 cigarettes a day would cause the same lung damage. Between detergents and chemical detergents, those who mop every day at home - and there are more women - would cause considerable damage to the respiratory system.

Under accusation by some Norwegian researchers at the University of Bergen are mainly sprays and liquid detergents. Their research confirms that women who work as cleaners or regularly use cleaning sprays or other cleaning products at home would have a greater decline in lung function than women who don't clean as frequently.

The reason is obvious: the particles contained in cleaners irritate the pneuma, causing critical damage to the airways.

The researchers analyzed data from 6.235 participants in the European Community respiratory health survey called “Cleaning at Home and at Work in Relation to Lung Function Decline and Airway Obstruction”.
Participants, whose average age was 34 when they enrolled, were followed for more than 20 years to assess long-term impact.

"We feared that these chemicals, by constantly causing little damage to the airways day after day, year after year, could accelerate the decline in lung function that occurs with age," the researchers explain.

Well, research has found negative consequences especially in women who clean and not in men. Comparing women who did not clean with those who did regularly (and also considering other factors such as possible smoking habit, body mass index and education), the forced expiratory volume to one second (Fev1), i.e. the amount of air that can be forcibly exhaled in one second was reduced by 3,6 milliliters (ml) / year faster in women who did house cleaning and by 3,9 ml / year faster in cleaners . The forced vital capacity of the lungs (i.e. the total amount of air a person can forcibly exhale), emerged reduced instead of 4,3 ml / year and 7,1 ml / year faster.

A real decline in lung function which, according to the authors, is "comparable to smoking a little less than 20 cigarettes a day for a year" and which may be due toirritation of the mucous membranes lining the airways caused by most chemicals in cleaning products, which over time cause persistent changes in the airways and reshaping of the airways.

This level of pulmonary impairment was initially surprising, said lead study author Øistein Svanes, "however, when you think about inhaling small particles of detergent that are used to clean the floor and not the lungs, maybe it's not that surprising after all. ".

Limitations of the study include the fact that the sampled population included very few women who did not clean at home or they didn't do this for work. These women, the authors write, could "constitute a selected socioeconomic group." The number of men working as professional cleaners was also small, and their exposure to detergents was likely different from that of women working as cleaners.

In any case, “the take-home message is that in the long run, chemicals are very likely to cause quite substantial damage to the lungs,” concludes Øistein Svanes.

And it is also true! Often chemicals aren't needed - a microfiber cloth, a few targeted products like citric acid or sodium percabonate, are more than enough for most purposes. Here you will find all our tips on ecological cleaning.
Read also:

Cleaning the tongue: 10 reasons to practice it consistently ❯

add a comment of Household Cleaning: Chemical cleaners are as bad as 20 cigarettes a day