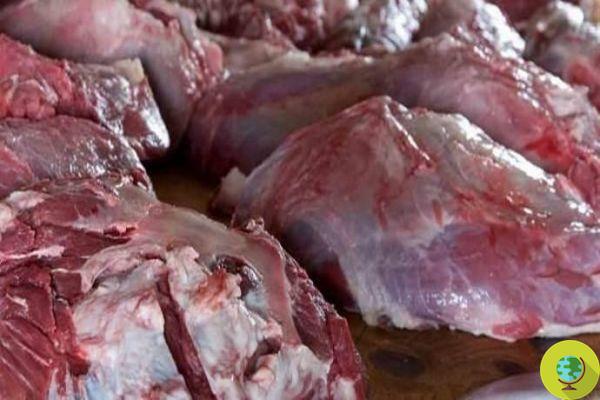 Spoiled meat and shocking hygienic discoveries. Chickens and pigs contaminated with fat, blood and other filth, meat destined for the food chain found perforated by fecal matter and pus-filled abscesses. An investigation by The Guardian casts new shadows on meat consumption in the United States and Great Britain.

Spoiled meat and shocking hygienic discoveries. Chickens and pigs contaminated with fat, blood and other filth, meat destined for the food chain found perforated by fecal matter and pus-filled abscesses. An investigation by The Guardian casts new shadows on meat consumption in the United States and Great Britain.

The Guardian came into possession of British government documents which describe an alarming situation, specifically what is happening in some of the largest meat plants in the United States, where 'shocking hygienic discoveries' have been made. All while growing the number of the US population that suffers each year food diseases, we are talking about 15% or one in seven. And there is no need to rest assured in view of free trade treaties such as Ttip and Ceta and especially after Brexit.

It is a real list of horrors what appears in the records of the US government that have not been made public, but which has come into possession of the English newspaper. There is talk of numerous missing hygiene rules and of meat that should never be eaten.

There are sick poultry found in containers for edible food products, pig carcasses that accumulate on the factory floor after equipment failure, resulting in contamination from grease, blood and other dirt and meat destined for the human food chain found perforated by fecal matter and pus-filled abscesses.

And again, high-powered hoses used to clean dirty floors alongside functioning production lines containing food, factory floors flooded with Dirty water due to sewers clogged with parts of meat and other debris, dirty chicken with feces or dropped on the floor, put back on the production line after being rinsed with diluted chlorine.

What the activists are doing

According to the companies involved, after the government checks, the situation would have already returned and there would be no risks for consumers, the version of the American and British activists is quite different. The former are calling for the cancellation of a rule that allows meat to be sold with salmonella, while the British are worried about what will happen now that Brexit is underway and fear trade deals that could give the green light to the entry of 'dirty meat'.

Second Erik Millstone, a food safety expert at Sussex University, the findings are worrying, “due to the risks of spreading infectious pathogens in carcasses and between portions of meat. Not surprisingly, episodes of poisoning caused by infected food are not uncommon and poor hygiene in the supply chain is the main cause of food poisoning in the United States ”.

The checks were carried out in 47 plants including the Pilgrim’s Pride, one of the largest poultry producers in the United States e Swift Pork. While not a complete picture of the industry - there are some 6 plants under the scrutiny of the Food Safety and Inspection Service (FSIS), the documents provide a snapshot of a troubling situation.

Kerry McCarthy, former UK environment minister and Labor MP, has asked for urgent reassurance from both the UK's Food Standards Agency (FSA) and top of government.

“We cannot allow this race to the bottom. We must insist that the United States raise their standards and ensure food security before we are ready to allow meat imports, ”McCarthy said.

The data of the documents

The Guardian does not have all the documents, but the investigation so far shows that in some plants there is an average of more than 150 violations per week and over 15 thousand throughout the year. As we said, among the companies accused is Pilgrim's Pride which recently bought the British chicken giant, Moy Park. The company butchers 34 million chickens every week, according to the documents he made 36612 1464 violations, an average of 24 per month in the 2014 plants, during a period between 2016 and XNUMX.

Despite the checks, however, the meat hygiene inspectors themselves admit that there is too much pressure and that inevitably some violations continue to be perpetrated.

add a comment of 'Dirty meat': the investigation into contaminated chickens and pigs regularly sold between the US and the UK