Diet drinks are no better than sugary ones. Both increase the risk of heart disease 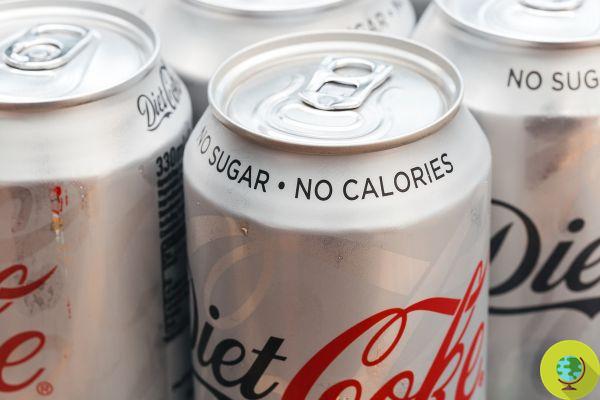 A new study shows that diet drinks are no better than sugary ones, both of which increase cardiovascular risk

There are still those who believe that diet drinks, ie those without sugar, are a healthy alternative, given their low calorie content. Experts have repeatedly warned that this is not the case at all. Now comes confirmation from new research that shows diet drinks increase the risk of heart disease.


A team of experts from the University of Sorbonne Paris Nord, Inserm, Inrae, Cnam, led by Eloi Chazelas, conducted a study on diet drinks, highlighting that these are by no means better solutions than those that contain sugar. In both cases, in fact, constant consumption exposes us to cardiovascular risks.

To make this claim, the researchers looked at i data from the French group NutriNet-Santé, relating to a sample of 104.760 participants who had completed questionnaires relating to their diet, physical activity and health status at regular intervals of six months.

In parallel, the researchers examined who, among the sample of people, had encountered cases of cardiovascular disease (such as stroke, transient ischemic attack, myocardial infarction, acute coronary syndrome and angioplasty) from 2009 to 2019.

At the end of the analysis, the experts found that participants who consumed sugary drinks had a higher risk of cardiovascular disease, which was no surprise, since sugar is linked to a number of health issues.

However, they also found that those who consumed diet versions of sweet drinks (containing substances such as aspartame, stevia and sucralose) had an equally high risk, compared to their peers who did not consume sugary drinks at all.

However, research has limitationsFirst, it only shows an association between the two factors, not a direct cause, and it also didn't distinguish between different types of artificial sweeteners, which may not have the same effects on cardiovascular risk.

As such, the researchers themselves admitted that the link between heart disease and artificially sweetened drinks should be further examined in a larger-scale group.

However, there are already previous studies that have come to more or less the same conclusions.

Zero calorie drinks: two a day are enough to increase the risk of stroke. The new study

Fonti: CNN / Journal of the American College of Cardiology

add a comment of Diet drinks are no better than sugary ones. Both increase the risk of heart disease