Dermatitis: what it is and how to treat it 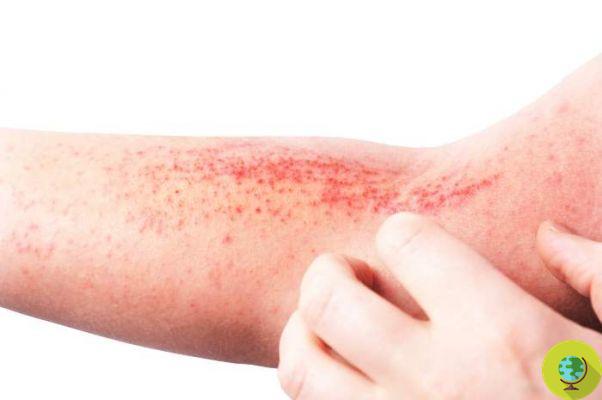 Dermatitis is a generic inflammation of the skin, which reddens, shows areas more or less swollen, peels and causes itching

Dermatitis is a general inflammation of the skin, which reddens, shows more or less swollen areas, peels and causes itching. In fact, the term is used to indicate disorders that are also very different from each other, which is why we speak of types of dermatitis.


Most common types of dermatitis

Among the types of dermatitis one of the most widespread is the so-called one atopic. It affects already at an early age and in many subjects it persists for a good part of life, as a chronic inflammation. Stress, pollution but also genetic factors seem to be at the basis of this type of inflammation, the actual causes of which are not yet known. The main symptom of the atopic dermatitis it is itching, which can be particularly accentuated at certain times of the year, or upon contact with specific substances or materials. Especially in children, itching causes an intense desire to scratch, which then results in rapid peeling of the skin. In many people, moist skin is a trigger of dermatitis, especially in the skin folds. Another widespread dermatitis is the seborrheic one, also in this case it is a chronic disorder, which lasts for many years, albeit with symptoms that tend to disappear and recur over the months. THE symptoms are similar to those of atopic dermatitis, although with seborrheic dermatitis there is also intense peeling, red spots and dryness of the affected areas.

Other Dermatitis - Information on Allies for Health

Le types of dermatitis mentioned above are not the only ones that exist, in fact there are many other types. In this regard, online information portals such as Allies for Health (from Novartis) they are useful for finding information on various kinds of topics relating to the medical field. On the portal in question it is in fact possible to find certain news and reliable data on pathologies, symptoms and causes. This applies to dermatitis, but also to many other diseases, such as migraines or diabetes.

On Allies for health it is possible to find numerous information regarding dermatitis and the various types, both the most common and the less known ones. A very common disorder that is talked about on the portal is the contact dermatitis. As the name of this type of dermatitis declares, it manifests itself on simple contact, more or less prolonged, with some substances. The symptoms are of various kinds, from the classic reddened spots to desquamation or the appearance of papules of various sizes; the itching is often very intense and occurs suddenly. The cause is usually allergic, but it is important to find which substance, material, plant or tissue is causing this response. Avoiding contact with this substance avoids the recurrence of contact dermatitis.

A less common type of dermatitis is herpetiform dermatitis, which occurs in subjects suffering from celiac disease. Again itching, redness and small blisters are the main symptoms. There are other types of dermatitis, which occur due to particular behaviors, or even due to daily stress. Self red spots, small blisters, itchy areas they occur quite frequently and do not tend to disappear, it is important to contact your family doctor. Only by undergoing some diagnostic tests is it possible to diagnose the type of dermatitis from which one is suffering and to arrange a therapy.

It is clear that a portal such as Allies for health is particularly useful, in fact anyone will be able to find various information concerning different problems. An information point consisting of articles written by medical-scientific journalists, verified and reliable content.

The diet that extends life? Low protein and semi-fasting 2 times a week ❯

add a comment of Dermatitis: what it is and how to treat it