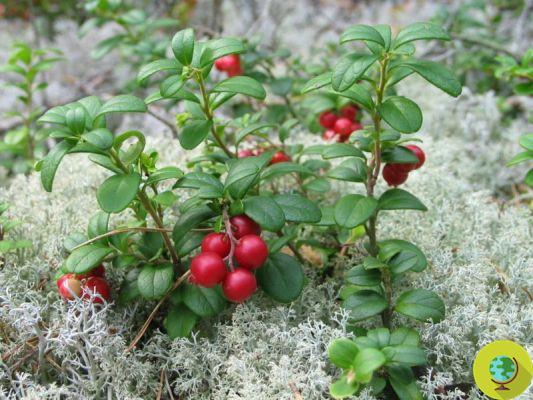 Cranberries are good, but above all healthy, because they help prevent urinary tract infections naturally.

I redberry they are good, but above all healthy, because they help prevent urinary tract infections in a natural way.


Long known for theirs anti-inflammatory properties, cranberries are also effective in infection prevention, in particular those of urinary tract.

To confirm what had been suspected for several years is a study conducted by a group of researchers from the National Taiwan University Hospital and National Taiwan University College of Medicine, published in JAMA's Archives of Internal Medicine, which they have cross-referencing the data of numerous previous studies, thus coming to the conclusion that to take cranberries in the form of juice or tablets it helps to keep viruses and bacteria away and to prevent urinary tract infections, a phenomenon that mainly affects women.

In fact, the beneficial effects of cranberries were already widespread enough in popular culture (especially in the wisdom of grandmothers), but scientists - until now - had not been able to explain why.

In light of the data that emerged from the new analysis, scholars have come to deduce that some compounds found in blueberries, and probably in other similar berries too, they create a kind of barrier preventing bacteria from adhering to the urinary tract, thus keeping infections away.

Scholars have come to this conclusion after having analyzed texts and scientific data, made in the past, concerning problems and urinary tract diseases, with particular regard to infections. Among all the studies recovered, the experts identified 13 significant analyzes in particular.

The cross-reading of the data and the related analysis led to the deduction that the urinary tract infections affect women and children to a greater extent and that cranberries are particularly effective against this type of pathology especially when they are taken, with a certain regularity, twice daily, in the form of fruit juice or concentrate in tablets.

“The results of the present meta-analysis - conclude the authors - support the idea that the consumption of products containing blueberry can protect against urinary tract infections in some populations. However, due to the substantial heterogeneity between studies, this conclusion should be interpreted with great caution ”.

If in doubt, however, go ahead for fruit salads, juices, syrups and cranberry centrifuges: they are good, healthy and prevent infections!

add a comment of Cranberries to prevent urinary infections