But here. The most powerful natural antioxidant comes from Patagonia 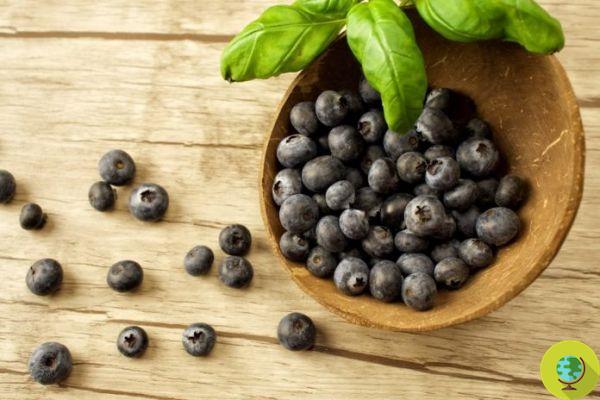 From Patagonia the Maqui, called the plant of God for its high power of polyphenols against aging and free radicals

The rugged and wild Chilean Patagonia, in addition to preserving legends and stories of adventurous travels, it preserves a real natural heritage. It is in these lands that what the Mapuche have called - since ancient times - "God's plant". This is the Maqui, a large shrub that can reach 5 meters in height, on which mature what are considered real "treasures": some berries with an intense blue color, very similar to the better known blueberries.


The intensity of the color of these extraordinary fruits is due to the high content of anthocyanins, a group of polyphenols which protect the shrub from the powerful solar radiation of those areas. In the last thirty years, the climate of the southern hemisphere, in conjunction with the increase in solar radiation, has caused a progressive increase of these natural pigmentsi, so much so that it became the Maqui the plant with the highest anthocyanin content of all.

Specifically, the Maqui is packed with one particular type of anthocyanins, delfinidine, which are i most powerful among the polyphenols: in fact, it would be necessary to drink 500 glasses of red wine to take the same quantity of delphinidins contained in one capsule of purified Maqui extract. And it is no coincidence that we are talking about capsules of purified extract: Maqui is as precious as it is rare and delicate. In fact, it is not possible to export it to our country from remote Chilean lands. The berries are then dehydrated and subjected to meticulous processing, which allows us to obtain the extract, called "Maqui Rx”To distinguish it from the actual fruit.

But what are the extraordinary properties of the polyphenols contained in Maqui?

First they are gods powerful antioxidants, therefore fight i free radicals and cellular oxidation, counteracting aging of the body and skin tissues. They also help the cells to counteract inflammation, a natural phenomenon of alteration that can become harmful when you lead a stressful life and eat in an unbalanced way.

THEintake of polyphenols it also helps the body to feel less stressed and more energetic, this is because polyphenols assist the cells in achieving an optimal energy state, facilitating the development of energy from fats, reducing the synthesis of cholesterol and improving blood flow.

I polyphenols are therefore a real cure-all for our well-being, as also confirmed by various scientific studies.

Barry Sears, the world's leading expert on hormone control through food and President of the Inflammation Research Foundation in Boston, says that:

“Polyphenols must play an important role in plants, otherwise they wouldn't use so much precious energy to synthesize them. In fact, polyphenols act as powerful antimicrobials and are the means by which plants defend themselves from viruses and bacteria. If polyphenols were not part of our diet, the body would become an easy target, and would be more prone to chronic diseases and rapid aging ”.

As further confirmation of the exceptional properties of Maqui, we report the statements of Juan Carlos Bertoglio, associate professor of Medicine at the Austral University of Chile:

“The original populations of the archipelago of Juan Fernandez, the Mapuche have always used Maqui. Especially the women caught my attention. There are very old ladies who come from the countryside, who stay in the sun all day, have never used creams, beauty dips, etc. and have the skin of a 25/30 year old woman. Surely this is also due to the lifestyle, which includes a diet rich in polyphenols and very similar to the Zone, that is, it includes vegetables and fish, but also Maqui and daily movement ".

In short, an even more precious treasure than those narrated by legends, to which science is dedicating studies and resources, and which it would be a real shame to let slip.

Maria, the plane pilot who does Yoga before flying conquers the web (PHOTO) ❯

add a comment of But here. The most powerful natural antioxidant comes from Patagonia