All crazy about potatoes, but watch out for glycoalkaloids: EFSA indicates dangerous doses of solanine & co. 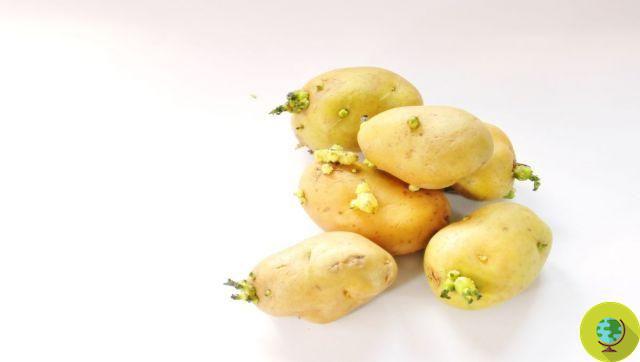 The glycoalkaloids contained in potatoes can cause poisoning: EFSA indicates potentially dangerous doses

Almost everyone likes potatoes, boiled, fried, cooked in the oven or in a pan with a drizzle of oil! But are they completely harmless? The answer is no due to the presence of glycoalkaloids such as solanine or cachonine, natural substances also present in tomatoes and eggplants, which, on the one hand protect them from parasites and insects, on the other are harmful to health if ingested. in large quantities.


That is why EFSA, the European Food Safety Authority, has recommended peeling, boiling and frying potatoes well before eating, to reduce the percentage of glycoalkaloids and avoid various forms of poisoning.

Potatoes, instructions for use. When it is best not to eat them

According to EFSA the life-threatening doses are between 3 and 6 milligrams per kg of body weight while the dose of 1 milligram per kg of body weight per day was the lowest to have caused undesirable effects. The problem does not concern adults, who are at risk only if they consume it in large quantities, but mostly babies and young children, even if they are average consumers.

Symptoms, which usually arise within 8-12 hours of ingestion, can be mild, such as gastrointestinal problems, vomiting, diarrhea, nausea, and much more severe.

To avoid more or less acute poisoning, EFSA suggests various methods: peeling, which contributes from 25 to 75% to the reduction of glycoalkaloids, boiling in water and blanching of peeled potatoes, which contributes in a percentage between 5 and 65 %, frying in oil, 20 to 90%, microwave cooking, 3 to 45%, oven cooking, 20 to 50%.

However, the more or less high glycoalkaloid content also depends on the duration of conservation, the storage temperature, exposure to sunlight and any damage to the tubers, not to mention that the shoots and the so-called "eyes" contain the highest concentrations. , and must therefore be eliminated. Attention then to the green parts, they too are full of them.

Several countries have regulations regarding the maximum glycoalkaloid limit: in Hungary it is 100 milligrams per kilo of potatoes, in Finland it is 200mg / kg, in Denmark it is 200mg GA / kg for known potatoes and 100mg / kg for potatoes. short stories. In the United States it is 200-250 mg / kg. But it is not easy to know the exact percentage if it is not indicated on the packages for sale and it is therefore essential to follow the advice of EFSA, avoiding excessive consumption of potatoes, especially at an early age.

Green and sprouted potatoes: here's why not to eat them. The BfR warns about the risks

FONTI: Risk assessment of glycoalkaloids in feed and food, in particular in potatoes and potato‐derived products – EFSA

Everyone's crazy about black garlic! The unexpected benefits that will make you want to eat it in wedges ❯

add a comment of All crazy about potatoes, but watch out for glycoalkaloids: EFSA indicates dangerous doses of solanine & co.