Why do some smokers not develop lung cancer? Thanks to the DNA that repairs itself according to this study 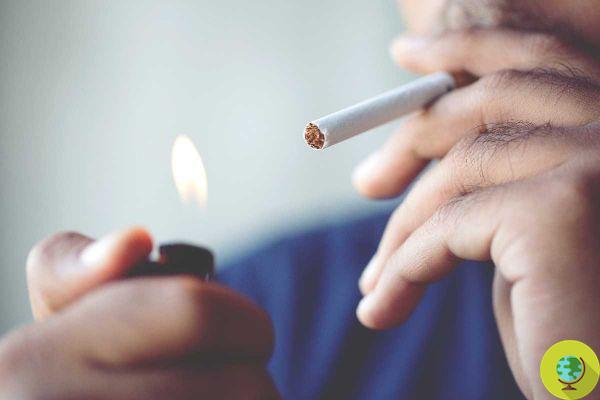 Recent research has sought to shed light on cigarette smoking and how it can cause cell mutations, which in turn cause lung cancer. The researchers analyzed how, despite this, some smokers do not develop the disease.

Research has shown that the lung cancer it is strongly linked to cigarette smoking.


For decades, researchers have suspected that the chemical carcinogens in smoke damage DNA and lead to cancerous mutations.

However, limitations in the study methods meant that until now this theory could not be conclusively proven, as there was no way to accurately measure mutations in normal cells.

They found that smokers had significantly more mutations in their lung cells than nonsmokers. However, heavy smokers no longer had mutations than less heavy smokers.

(Read also: Electronic cigarettes, long-term side effects discovered: this is how they inflame the brain, heart and colon)

For the study, the researchers took samples of lung cells and airways from 33 individuals, including:

Participants with the smoking habit reported smoking between 5,6 and 116 packs of cigarettes per year. The researchers noted that 14 of the 19 smokers were diagnosed with lung cancer, along with one non-smoker.

Eventually, they found that changes in human lung cells accumulate with age, and that smokers have more mutations than nonsmokers. They did not, however, notice statistically significant numbers of mutations in the cancer genes.

This was not an unexpected result, as mutations occur randomly.

They said their most interesting finding was that the mutation rate drops after 23 packs of cigarettes. This means that heavy smokers did not necessarily have more mutations than moderate smokers.

They further stated that this phenomenon is unrelated to cancer incidence.

To explain why the frequency of the mutations has stabilized, the researchers stated that:

First, some smokers may have better detoxification systems to take care of the mutagenic compounds in tobacco smoke before they can inflict DNA damage. Second, they may have superior DNA repair systems that take care of the damage and repair it quickly.

Hence, the researchers say their study shows that smoking increases the lung cancer risk, increasing the frequency of genetic mutations.

They add that their findings may also explain why only 10-20% of smokers develop lung cancer, and that this could be due to DNA repair or to the optimization of detoxification from tobacco smoke.

Sul cigarette smoke could it be interesting for you:

Why have some people never contracted Covid? ❯

add a comment of Why do some smokers not develop lung cancer? Thanks to the DNA that repairs itself according to this study