Thus the intestinal bacteria "mate" to take vitamin B12. I study

Research has shown that intestinal bacteria need vitamin B12 just like we do and that they transfer genes through so-called 'bacterial sex' to take it.

Intestinal bacteria need Vitamin B12 and to have it "mate". A research, led by the University of California at Riverside (URC), USA has shown that these very important microorganisms need vitamin B12 just like us and that they transfer genes through "sex" to take it.


Without vitamin B12, most types of living cells cannot function. As a result, there is stiff competition in kind for its supply. Even tiny organisms such as gut microbes share the ability to acquire this valuable resource through a process called bacterial sex.

It was already known in reality how this mechanism, which had been verified several times, was capable of transferring what are known as "jumping genes" between organisms. But in most of the examples studied so far this has been found to help bacterial cells stay alive when people take antibiotics.

Today we know instead that it is set in motion to take substances useful for survival even in normal conditions, that is, without external interventions such as taking drugs. A particular “coupling”, which does not generate progeny to which the genes are transferred, but with which these genes pass between the organisms that mate.

The process involves a cell forming a tube through which DNA can pass to another cell - explains about this Patrick Degnan, who led the study - It's as if two humans have had sex and now both have red hair.

The results came after years of study: previously the team had identified an important transporter responsible for introducing B12 into gut microbial cells. More recently, he was studying i jumping geniuses, first identified in 2000 following a historical research for microbiology led by the University of Wisconsin.

Studies by Degnan and colleagues sought to specifically identify what kind of information they were able to transfer, mixing bacteria that could carry vitamin B12 and others that could not.

Result? The transporter microorganisms formed a kind of tube that facilitated the transfer of genes, and those previously unable to carry B12 were all still alive and had acquired genes with the ability to do the same.

Read also: Microbiota Vs Microbiome: What's the Difference and Why You Should Care for Both 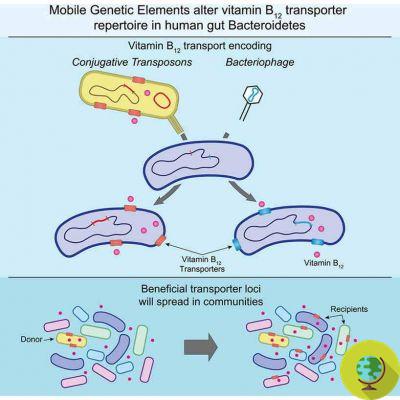 But it doesn't stop there. In a second experiment, the researchers examined the entire genome of the bacteria instead, verifying that the B12 recipients had an extra band showing the new DNA received from the donor.

The molecules contained in beans, whole grains and vegetables would pass through our bodies completely without these bacteria - continues Degnan - They break them down so that we can get energy from them.

Learning how to keep these bacteria healthy is critical to our health.

There is no way to have a healthy microbiome - specifies the scientist - but, in general, having a diverse community of anaerobic bacteria is a healthy thing and can have beneficial effects

The work was published in Cell Reports.

Thus our gut microbiota unexpectedly accumulates drugs, without us realizing it ❯

add a comment of Thus the intestinal bacteria "mate" to take vitamin B12. I study