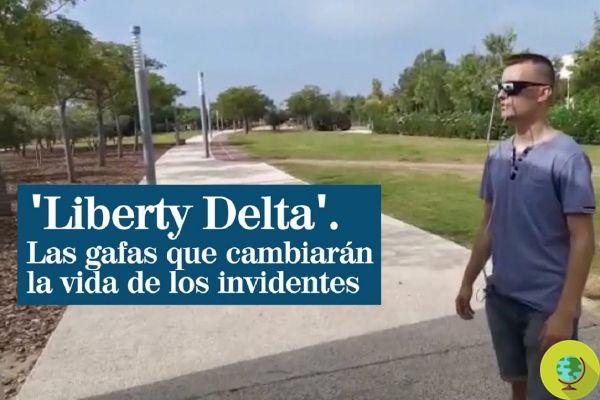 Three Spanish students have invented a pair of glasses for the blind that allow them to move independently on the streets of cities.

We know how difficult it is for a blind person to move independently but perhaps a solution has finally been found. Thanks to 3 students from the University of Almería (UAL), who created gods intelligent glasses able to detect obstacles in the urban environment through special sensors, to allow those who cannot see well, or are completely blind, to move safely on the streets.


They are called Liberty Delta and it is about 3 devices that join together, starting with a couple of glasses equipped with sensors that identify obstacles, transmitting information in bands positioned on the feet, so that the blind can know their position according to the vibration of the right or left foot.

The information from the ultrasonic sensors is translated by an application that connects the glasses with the feet, emitting a vibration code. When the blind person approaches an obstacle, the rhythm of the impulses increases and the impulse becomes continuous when the obstacle is very close.

The sensors are meant to connect via bluetooth although the prototype still works with cables.

But how did the idea come about? It all started when the initiative "Summit of the factory of ideas (IF Summit)" took place on 28 March in Seville, in which 18 university entrepreneurship projects took part, 3 of which came from the UAL.

On that occasion, the 3 students proposed their idea, winning favors, and then participating in the UAL Ideas Fair they won two awards, one for the best entrepreneurial project and one for Verdiblanca.

Proof that this is a truly innovative project, which it could allow the blind to move safely along the roads, but which at the same time could also be used in the home. For the future the students would like not only to improve it, for example by removing the cables, but also to connect it with the traffic network.