This is why our brains crave French fries 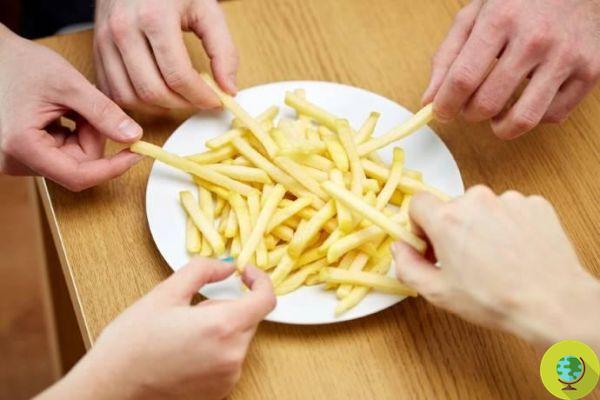 Why do we sometimes only crave certain types of foods? All the fault of the brain!

Junk food: why do we sometimes crave it more than anything else? Gluttony, stress, emotional shortcomings? There are those who swear it is actually only the fault of the brain, which often considers foods high in fat and carbohydrates much more "enjoyable" than the simpler and more natural foods.


This is supported by a study by Yale University's Modern Diet and Physiology Research Center, according to which cI enter brain reward accounts for foods that are high in fat and carbohydrates, that is, processed foods, more than foods that contain only fat or only carbohydrates.

If it is true as it is true, in short, that food is a "natural" reward for our body, on the other hand it is already known that it is junk food, such as french fries from fast food, that triggers a system in our brain from reward through the release of chemicals that give a feeling of well-being, such as dopamine. A similar process which, among other things, also works for drugs and which contributes to the likelihood of finding yourself eating compulsively.

A group of 206 adults were analyzed and brain scanned while being shown photos of snacks that contained fat, sugar, or a combination of both. Participants were then given a few sums of money to make "offers" on their favorite foods and would be more willing to spend more on those that combined fat and carbohydrates.

Researchers say our brains seem to estimate how many calories there are in foods with only fat or carbohydrates, helping to regulate how much we eat. But it is when the two come together that things get complicated.

"Our study shows that when both nutrients are combined, the brain appears to overestimate the energy value of food," explained Dana Small, of Yale University.

Our trend towards these foods could also be linked to the fact that combined fatty foods and carbohydrates rarely exist in nature, with the exception of breast milk, which is useful for babies to survive.

"In the modern food environment that is rich in high-fat, carbohydrate-rich processed foods like donuts, potato chips, chocolate bars, and potato chips, this reward enhancement may backfire on promoting overeating and obesity."

Our ancestors ate mainly woody plants and animal meat, while processed foods only appeared in the last few centuries.

"In nature, foods high in fat and carbohydrates are very rare and tend to have fiber, which slows down metabolism," Small said. Conversely, it is very common for processed foods to be fat-laden and high in carbohydrates ”.

Conclusion? According to this study, our brains still haven't evolved enough to realize that we shouldn't be eating these types of foods all the time. And who knows if we'll get there. In the meantime, if it's the french fries that make our brain system satisfied, why not try an alternative recipe of chips for all tastes?

This is why yawning is contagious ❯