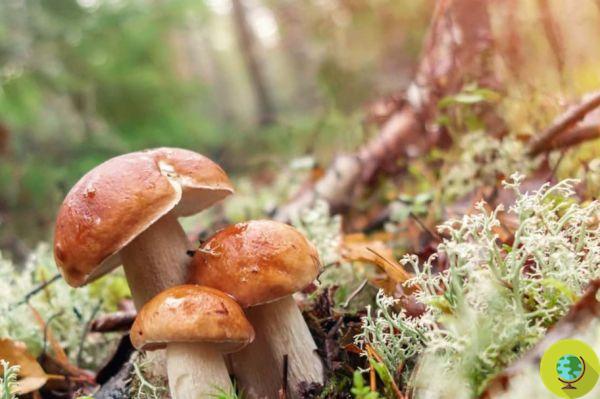 Could mushroom-based microbial proteins be a good plant-based alternative to beef to save the planet? A new study published in Nature seems to go in this direction: the researchers speculate that by replacing 20% ​​of beef with microbial proteins deforestation could be halved by 2050. Let's see in detail.


As we know, cattle produce a greater amount of emissions of greenhouse gases compared to all other farm animals and if we think, that almost every year, in the world they are produced 60 million tons of beef, the environmental impact is easy. So while, for example, the Netherlands, the largest exporter of meat in Europe, is planning to reduce the number of animals raised on the national territory by as much as 30%, the researchers of the Potsdam Institute for Research on Climate Impact (PIK ) think of long-term alternatives, namely how to replace beef with microbial proteins.

“The food system accounts for a third of global greenhouse gas emissions and ruminant meat production is the most important source,” explains Florian Humpenöder, PIK researcher and lead author in the study.

We've talked many times about the environmental impact of steak and the fact that over half of the greenhouse gases produced by humans today are emitted by industrial livestock farms. But there is not only the problem of intensive plants, but also and above all of deforestation.
As the study reads, more and more carbon-storing forests are being cleared for grazing livestock or for growing feed, causing additional greenhouse gas emissions from animal agriculture. One solution, according to the researchers, could be microbial protein, which is a protein-rich biomass with a meat-like texture produced by microbes such as fungi via fermentation.

“Replacing beef with microbial proteins in the future could significantly reduce the greenhouse gas footprint of the food system,” says Humpenöder. “The good news is that people don't have to be afraid that they will only be able to eat vegetables in the future. They can continue to eat burgers and the like, but produced in a different way, not with meat ".

During the study, the team replaced the ground red meat with microbial proteins. In a computer simulation he basically managed to detect environmental effects in the context of the entire food and agricultural system. That is, by eating sustainable hamburgers, we analyzed what could happen up to 2050 taking into account future population growth, food demand, dietary patterns, as well as dynamics in land use and agriculture. As meat consumption is likely to continue to increase in the future, more and more forests and natural vegetation will disappear to make way for pastures and farmland.

“We found that by replacing 20% ​​of beef by 2050, annual deforestation and CO 2 emissions from land use change could be halved compared to the current scenario. The reduced number of cattle not only reduces the pressure on the land, but also the methane and nitrous oxide emissions from feed fertilization or manure management ", says Humpenöder" So replace the ground red meat with microbial proteins it could be the way to reduce the negative impacts of current beef production ”.

Microbial proteins are produced in specific crops, just like beer or bread. Microbes thrive on sugar and a constant temperature and produce a very protein-rich product that can have both the flavor and nutrient of red meat. Based on the centuries-old method of fermentation, it was developed in the 80s. The U.S. Food and Drug Administration (FDA) gave the green light to an alternative to microbial protein meat (mycoprotein) as safe as early as 2002.