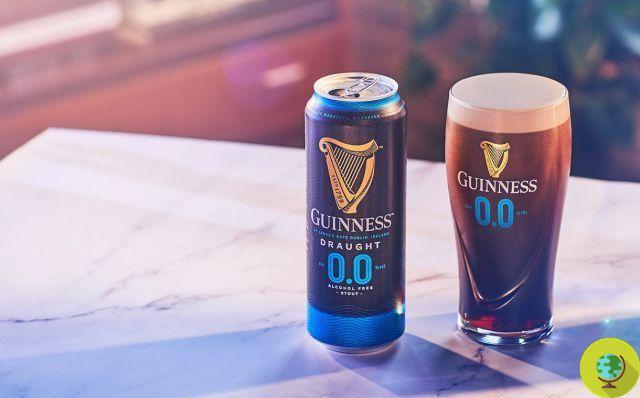 The historic Irish brand therefore offers a non-alcoholic variant produced by the brewers of St James's Gate which, according to the producers

In 2017 it had become vegan but now the alcohol-free version also arrives. It is the new Guinness 0.0 just announced by Diageo, a global leader in the spirits and beverages sector.


The historic Irish brand therefore offers a non-alcoholic variant produced by the brewers of St James's Gate which, according to the producers

A drink that meets the tastes or needs of those who do not want or cannot consume alcohol but who do not want to give up the taste of the well-known beer. To get to the production of Guinness 0.0 it took 4 years of research and testing by the technical and innovation teams.

“The journey to the launch of Guinness 0.0 drew on the proud 261-year history of Guinness beer innovation and brilliance dating back to 1759. The commitment to maintaining the distinct character and taste of Guinness was central,” explains the team.

To create Guinness 0.0 the brewers at St James's Gate started by brewing Guinness exactly as they always have, using the same natural ingredients; water, barley, hops and yeast. Only later did they gently remove the alcohol through a cold filtration method, which allows the alcohol to be filtered without presenting thermal stress to the beer, protecting its integrity of taste and character. THE

“The resulting product is unmistakably Guinness, only without alcohol, characterized by the same liquid and creamy foam of dark ruby ​​red color, hints of chocolate and coffee, harmoniously balanced with bitter, sweet and toasted notes. In tasting tests by an independent jury, they found that Guinness 0.0 "exceeded expectations" with its taste praised as "exceptional", the official statement reads.

According to Gráinne Wafer, Guinness' Global Brand Director, the launch of the 0.0 leverages the knowledge of brewers to create an alcohol-free beer that is 100% Guinness.

"We know that people want to be able to enjoy a Guinness when they choose not to drink alcohol without compromising the taste, and with Guinness 0.0 we believe they will be able to."

From October 26, the new beer will be available from Waitrose and Morrison online and in-store. It will be marketed in pubs across Ireland and Great Britain from spring 2021 and around the world over the next year.

Taste and food choices? They depend on our genes ❯

add a comment of Guinness launches 0.0, the new alcohol-free and low-calorie "beer"