Stevia: Grow and produce your own natural sweetener

Stevia rebaudiana is a plant native to Paraguay and Brazil, perennial of the Compositae family, has very strong sweetening properties, much stronger than those of sugar and yet for years it has been boycotted.

Stevia rebaudiana is a plant native to Paraguay and Brazil, perennial of the Compositae family, has properties very strong sweeteners, much stronger than sugar and yet it was boycotted for years.


Until the 50s, however, it was cultivated a lot in our country inexpensive and easy to find, cultivation and propagation on the contrary of sugar which in times of war was not within everyone's reach.

However, its approval process was very long, even for years it was based on a study dating back to the late 60s in which it affirmed its toxicity after they were administered very high dosages to guinea pigs in the tests carried outi: the main cause of fallibility of the same test was the not understanding the high sweetening power of the plant in question and therefore the extremely oversized dosages not compatible with the use.

But today they have been made further tests, both in Europe and in the USA, where stevia definitely has passed all toxicity tests to which it has been subjected (considering the dose of a daily consumption which is approximately 10mg al gg has been tested in doses of gr).

If that wasn't enough, however, stevia has always been present in nature and for dozens for years regularly consumed by the populations of South America as a plant not only with enormous sweetening but also curative properties.

Da December 2011 was finally regularized and it was allowed its use, but only as a "food supplement", while his sale like sugar was not recognized.

Its active ingredient, it steviolo, is suitable for those with diabetes as it does not affect insulin levels.

The active ingredient is present in significantly in the leaves of the plant and today stevia can be easily done find in nurseries: you can use it fresh directly using the leaves infused in tea or it is possible to make an herbal tea with a very very sweetening power.

As we said since December 2011, stevia has entered the food supplement category as withholding energizing and used in sports and herbal medicine: the leaves after being harvested are dried and then pulverized, with its active ingredient then on the market they sprouted like mushrooms many food sweeteners that until a few months before the legalization of the plant could only be found based on aspartame, cyclamate or saccharin.

For who is it diabetic in fact saccharin, aspartame and cyclamate, all synthetic sweeteners, were the only alternatives easily and legally available on the market, although stevia has always had an extra quality that synthetic sweeteners have never been able to have (apart from obviously not having any contraindication if used in normal doses) has a very pleasant taste on the contrary, for example of saccharin which has a bitter aftertaste but above all perfectly holds up to cooking (which for example aspartame does not do) and in this the stevia results perfect for sweets or drinks.

The stevia then has 0 calories and can be used to make desserts: winning combination for those who do not want line or health problems! 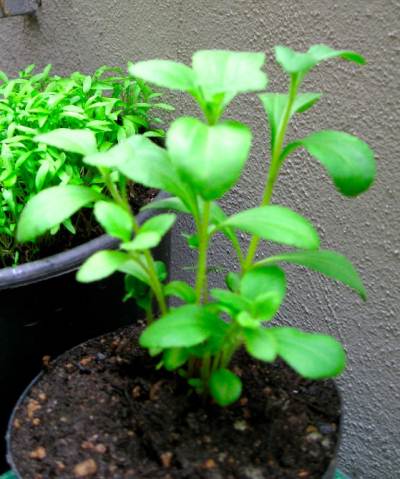 La cultivation of the stevia plant it is really easy: stevia changes its growth activity depending on the soil in which it lives, if it is a clayey soil it will give smaller leaves with less sweetening power and will grow in height, if instead it is a loose soil the plant will be more full-bodied , will have larger leaves and with greater sweetening power.

Additionally the stevia plant has aenormous propagation power: removing a sprig and placing it immediately in the ground it will tend to root spontaneously, this enormous property has earned it the name of pioneer plant as it easily covers and colonizes any area contingent on it

Do you want to make your own supplement with sweetening properties?

Easy, get yourself a stevia plant, grow it and cut it immediately after flowering

Then dry it upside down in a paper bag in the dark and then, once it is perfectly dry, put it in the blender, you will get a magical powder with 10 times more sweetening power than any other sweetener or sugar on the market!

Are you living a fulfilling life? The scientific test that answers the question ❯

add a comment of Stevia: Grow and produce your own natural sweetener