Buddha's hand: a curious fruit that is beneficial and lucky

Most of you will probably never have had the opportunity to meet that curious fruit which due to its peculiar shape is commonly called "Buddha's Hand". It is a citrus fruit, to be precise a variety of cedar (Citrus medica var.sarcodactylus), whose segments do not develop in the usual way, giving rise to a fruit with a rounded shape, but branch out forming extensions very similar to of the fingers. For this reason the shape of the fruit closely resembles that of a hand

Most of you will probably never have had the opportunity to meet that curious fruit which due to its peculiar shape is commonly called "Hand of Buddha". It is a citrus, for the accuracy of one variety of cedar (Citrus medica var.sarcodactylus), whose cloves do not develop in the usual way, giving rise to a fruit with a rounded shape, but branch off forming extensions very similar to fingers. For this reason the shape of the fruit closely resembles that of a hand.

The fruit grows on small trees and bushes of Asia, with special reference to China, Japan and Northern India. It seems that Westerners traveling to the East, seeing this fruit placed on the stalls, mistakenly mistake it from afar for a bunch of small bananas, fruits with which it shares only the color. His peel it can be more or less thick and the characteristic that makes it special and that can leave those unfamiliar with its use doubtful is the presence of very little pulp inside and the frequent absence of juice. Sometimes even the seeds are absent in it.

What characterizes it, in addition to the form, is a delicious scent which remembers only remotely that of citrus fruits. Its fragrance is considered so pleasant that the fruit is used for perfume linen and clothes inside drawers or wardrobes. Its peel is often left to ferment or enjoyed after having candied it. The fruit can also be used for the preparation of alcohol-based beverages, such as liqueurs. To soften the skin, it is subjected to boiling processes.

This singular fruit also comes used simply for its own peel, which is very thinly sliced ​​or minced and used as an additional ingredient in numerous sweet and savory preparations.

The tree that gives life to its fruits grows in temperate climate conditions and does not like excesses. Its ideal location is located allinterior of valleys. Its presence, as well as in the East, can be identified in some areas of the United States.

In China the fruit is regarded as a lucky charm. It is simply placed in the center of the table and is usually given to guests as a sign of good luck, to achieve a long and happy life. The fruit, which in China is called do "fo-shou", is used in the kitchen or for scent home environments, but it is also often prescribed as a tonic and stimulant for the body. It is also considered a symbol capable of bringing prosperity, fertility and longevity.

Similarly, in Japan, where ithe fruit is called "bushukan", it is considered to be the bearer of good fortune for those who live in the house in which it is located. It is one of the typical gifts that the Japanese exchange on New Year's Day. It is used in homes such as decorative element instead of flowers, also in setting the table, or is combined with symbols and statuettes of a religious nature. In Japan, its plant is also grown in the form of bonsai. 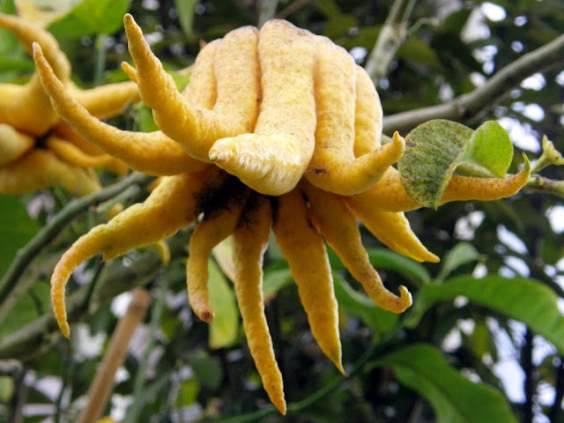 As the name attributed to the fruit suggests, it has long been regarded as one of the best gifts of thanks to give to Buddha. Two fruits placed side by side in the correct way can recall the shape of two hands joined in prayer. The fruit can be consumed by cutting the "fingers" that make it up and then slicing them lengthwise. It can normally be eaten raw or used for the preparation of jams. It is also a particularly dietary fruit, as it provides a very low calorie intake and completely fat-free.

- 8 Super Nutritious Foods You Are Probably Not Eating

add a comment of Buddha's hand: a curious fruit that is beneficial and lucky