And so we started raising salmon "on the ground" that end up in sushi ...

In Florida, there is a large land-based salmon farm, BlueHouse, which aims to produce 222 tons of fish by 2031.

Most of the salmon that arrives on our tables and also ends up in sushi comes from farms, places where fish suffer a series of cruelties. Now a company in the United States, and it's not the only one, has started raising salmon "on the ground".


It sounds completely insane, and yet it really is happening: there are land-based salmon farms and one in particular, which aspires to become the largest producer for the United States, is located southwest of Miami in Florida. Here 5 million fish live closed inside some tanks completely outside their natural habitat.

The Atlantic salmon is a typical fish of the cold waters of Norway and Scotland, this species therefore does not adapt to the tropical heat of states such as Florida. However, this has certainly not slowed down those who have decided to breed salmon just there, aiming at the American market.

The solution found by Atlantic Sapphire, the Norwegian company that created the Bluehouse, was precisely to create a salmon farm on land, which concretely means that large well-chilled water tanks were placed in a large building similar to a warehouse. Here, of course, air conditioning is used to create the right climate for the salmon to survive.

Recirculating aquaculture systems are used that are able to control everything: temperature, salinity and pH of the water, oxygen levels, artificial currents, lighting cycles and removal of carbon dioxide and waste.

Since it is a closed circuit system, the water is in fact filtered and reused, the producers claim that the salmon is not exposed to diseases and parasites present in the sea, so unlike traditional farms, the fish are not treated with antibiotics or other medications.

You may be wondering why a Norwegian company decided to build its plant in Florida. Simple, it intends to establish itself on the American market, also eliminating inconvenient trips. Of course, the company claims it's a commitment to sustainability “we raise fish locally to transform protein production globally,” he writes on Facebook.

At Atlantic Sapphire, our commitment to sustainability is why we farm fish locally to transform protein production globally. Want to learn all about how we are feeding the future and saving our seas? Visit our NEW website: https://t.co/LF8vrAIlZ0 pic.twitter.com/vf0etr4PYI 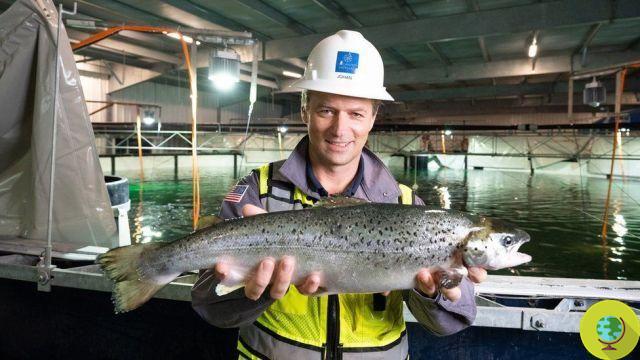 But even if antibiotics are not used, how is it possible to consider an intensive farming like this one, done in a context completely foreign to fish and consuming large amounts of energy to make it work and produce, better, more sustainable and healthier?

The animal rights association Peta has already criticized BlueHouse and similar companies that, in other parts of the world, raise salmon on land:

“Farms, at sea or on land, are pits of dirt. Fish are not sticks with fins waiting to be cut, but living beings capable of feeling joy and pain. Raising them like this is cruel and certainly not necessary, ”said Dawn Carr, director of Peta's vegan corporate projects.

The Bluehouse began operations last year with the aim of becoming the largest terrestrial fish farm in the world, aiming for a production of 9500 tons of fish per year and reaching 222 thousand tons by 2031. In practice it aims to provide 40% of the annual salmon consumption in the United States.

Will this be the future of farmed salmon?

It's time for the pomegranate, the autumn fruit that protects your gut ❯

add a comment of And so we started raising salmon "on the ground" that end up in sushi ...