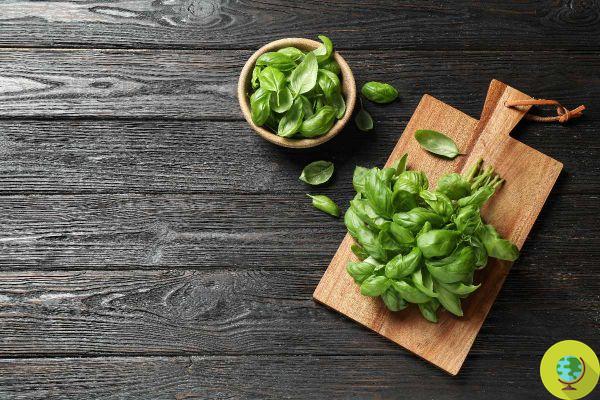 Fenchol, a natural compound found in basil, appears to have a neuroprotective effect against Alzheimer's disease

Fenchol, a natural compound found in basil, appears to have a neuroprotective effect against Alzheimer's disease


Fenchol is a natural compound present in basil and other plants, capable of reducing the formation of "zombie" neural cells and increase the degradation of beta-amyloid non-functional, allowing for faster elimination of the protein from the brain.

The new study discovered a detection mechanism associated with the intestinal microbiome, which explains how fenchol reduces neurotoxicity in the brain caused by Alzheimer's disease.

Emerging evidence indicates that the short-chain fatty acids (SCFA), metabolites produced by beneficial gut bacteria and a primary source of nutrition for colon cells, contribute to brain health. The abundance of SCFA is often reduced in older patients with mild cognitive impairment and Alzheimer's disease, the most common form of dementia. However, how this decline in SCFA contributes to the progression of Alzheimer's disease remains largely unknown.

The new study is the first to discover that stimulation of the sensing mechanism by these microbial metabolites (SCFA) may be useful in protecting brain cells fromtoxic accumulation of beta-amyloid protein (Aβ) associated with Alzheimer's.

One of the two typical features of Alzheimer's are the hardened deposits of Aβ, which aggregate between nerve cells to form plaques of amyloid proteins in the brain, and the neurofibrillary tangles of tau protein inside the brain cells. These two processes contribute to the loss and death of neurons, which ultimately lead to the onset of Alzheimer's, a neurodegenerative disease characterized by loss of memory, thinking skills and other cognitive abilities.

The research aims to delve into the previously unknown function of FFAR2 in the brain and the molecular mechanisms, to explain how interactions between the gut microbiome and the brain could influence age-related cognitive decline. Researchers first showed that inhibition of the FFAR2 receptor (thereby blocking its ability to "detect" SCFAs in the environment outside the neuronal cell and transmit signals within the cell) would contribute to the abnormal accumulation of the Aβ protein causing neurotoxicity .

Identify a natural compound alternative to SCFA optimally targeting the FFAR2 receptor on neurons is important, because the cells of the intestine and other organs consume most of these microbial metabolites before they reach the brain via the bloodstream.

The research team believes fenchol, a plant-based compound that gives basil its aromatic scent, is best at binding to the active site of FFAR to stimulate signaling. When the researchers took a closer look at how this natural compound modulates Aβ-induced neurotoxicity, they found that it reduced senescent neuronal cells, also known as "zombie" cells, commonly found in the brain with Alzheimer's disease.

The fenchol present in basil would, therefore, be capable of reduce the formation of zombie neuronal cells and also increase the degradation of Aβ (not working), so that the amyloid protein is cleared from the brain much faster. Obviously, more research is needed to understand whether the fenchol consumed in the basil itself is more or less bioactive than isolating and administering the compound in pills.