Smudge stick: the best plants and flowers to prepare the bunch that purifies the house

To prepare the smudge stick you need the right plants: here is a list of the best, from sage to lavender.

We have already told you about the smudge stick, the ancestral bunch of dried herbs traditionally used to purify environments, objects and even people. Smudging is in fact a ritual with ancient origins, practiced by various indigenous peoples, who considered the smoke emanating from herbs to be sacred and curative.


But not all plants and flowers are suitable for this purpose and today we want to show you the most suitable ones, from rosemary to sage, from rose to lavender. You can use them individually or combine different ones, depending on your preferences, letting the bunches dry before burning them. 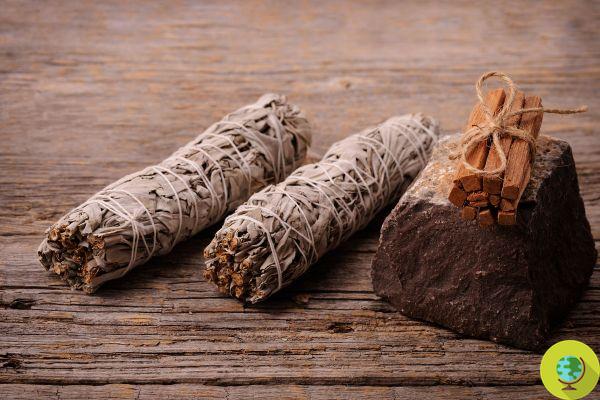 Sage is often used to make smudge sticks. His smoke, believed to be a healer, is used both to purify environments and to bless people. It is also used, as TaosHerbCo explains, to purify sacred spaces and environments intended for the performance of ceremonies. Objects were also traditionally purified with sage smoke.

Cedar trees are considered by some indigenous cultures to be wise and powerful. And it is no coincidence that their needle-like leaves are used to prepare smudge sticks useful for house purification and, according to the beliefs of indigenous peoples, ideal for warding off negative energies. Furthermore, the scent is very pleasant, fresh and pungent.

Less known to us is Sweet Grass, Hierochloe odorata, a herb considered sacred by the indigenous peoples of Canada and the United States. It has a sweet vanilla scent and is said to be able to by the natives bring the blessing of Mother Earth. It is burned in the form of a smudge stick to remind us that the earth provides us with everything we need.

Lavender is one of the most used plants in the preparation of smudge sticks. In different cultures the ability to ward off negative energies is attributed to its perfume. Among other things, in aromatherapy it is used to perfume and refresh the rooms of the house, but also in case of insomnia since it boasts calming properties. Purifying, also excellent for reconciling relaxation and promoting concentration.

Among the herbs most used for smudging is also rosemary, which boasts countless beneficial properties, considered a real natural antibiotic. It serves to purify the home and is considered protective. It also smells great.

The rose is used to promote meditation and to bring serenity. And having a very good smell, it is ideal for perfuming rooms.

Hypericum, the magic herb par excellence, has many beneficial properties and is considered an excellent remedy in times of great stress. It is said to promote a positive mental attitude and therefore lends itself very well to the preparation of purifying smudge sticks.

Another plant you can use is eucalyptus, which boasts antibacterial, anti-inflammatory and pain-relieving properties. Considered purifying, protective and useful for promoting healing, probably by virtue of its beneficial properties.

add a comment of Smudge stick: the best plants and flowers to prepare the bunch that purifies the house