Marijuana distributors. Medbox is the name of the new vending machine that will be installed in 30 points in San Diego, in the USA, which has ended up at the center of numerous controversies. Because inside there will be no chips, cans or candies, but 800 different types of cannabis, made available to patients authorized to buy it for therapeutic purposes.

Marijuana Distributors in the United States. Is called Medbox, the new vending machine that will be installed in 30 points in San Diego, in the USA, which has ended up at the center of numerous controversies. Because inside there will be no chips, cans or candies (let alone objects to be reused for swapping or books for bookcrossing), but 800 different types of cannabis, made available to patients authorized to buy it for therapeutic purposes.

The question is a must. Is this system safe? Obviously, assures the managing director of Medbox, Bruce Bedrick: “the plant has been designed to avoid fraud and is thief-proof“. In fact, in addition to weighing far beyond that 350 kilos and to be armored, Medboxes ask the user to swipe a magnetic card that ascertains the need for therapeutic cannabis treatment and to provide a fingerprint before dispensing the medicine. "I think it's critical for patients to get their medicine safely, and if that's a means of doing that, it's wonderful," said Eugene Davidovich of Safe Access, an advocate for access to medical marijuana.

In addition, over the past four years, Bedrick recalls, the 150 distributors installed nationwide in Canada have never been affected by crime. But the mayor of San Diego, Bob Filner, wants to propose some rules in the opening of retailers: there must be a distance of about 200 meters from schools, churches, public parks and libraries. 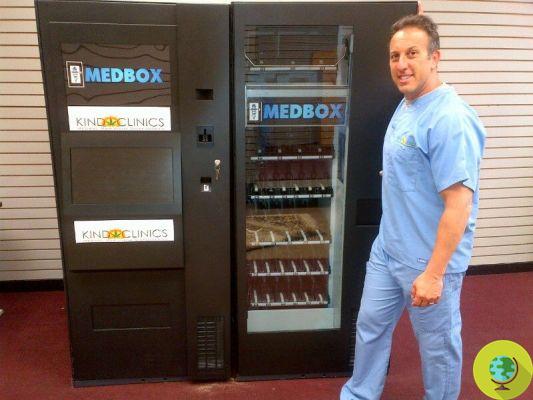 “I think we should find a balance ed is what we are trying to do. I think the initial city council rules are too restrictive. And I think that some of the requests of the American For Safe Access are instead too open, for which a compromise must be found “, commented, instead, the mayor. And, in the meantime, waiting for the "right compromise", the sick are forced to travel long distances either use the illicit market to get the drug that works best for them.

- Cannacig: the electronic spinel depopulated in the USA

- Cannabis: Growing marijuana for personal use is not a crime

add a comment of Medbox: marijuana vending machines in the USA