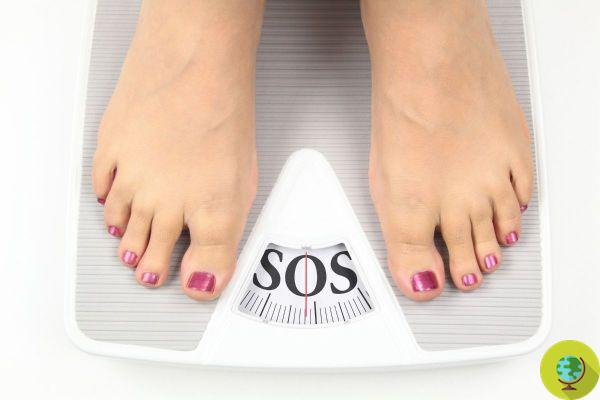 Diet and physical activity are often not enough to keep body weight under control, and the reason may be in DNA

Often diet and physical activity are not enough to keep body weight under control, and the reason could be contained in the DNA: an important study, in fact, has highlighted a rare genetic variant that would be at the basis of weight control mechanisms.


Every year 2,8 million people die from problems related to overweight or obesity - such as type 2 diabetes, cancer, cardiovascular problems (and even severe forms of Coronavirus) worldwide. A healthy diet and daily physical training can help obese people lose weight, but it is above all the genes that determine whether a person develops overweight and obesity problems: researchers, in fact, have always been looking for genetic mutations at the base of diseases and problems of health, they found that there are variants of the same gene that can also promote good health and weight.

A previous study conducted on the DNA of people with severe obesity had already identified a common genetic variation - a 'distorted' copy of the MC4R gene, linked to the regulation of appetite - which leads many people to be overweight. Now a recent study has discovered that there is also another variant of the same gene capable of predisposing the subject to overweight and obesity.

(Read also: Piling up even 5 kg more on the waist and hips increases the risk of developing 10 of the most common cancers)

Researchers have sequenced the genomes of more than 640.000 people in Mexico, the United States and the United Kingdom - an immense work that has resulted in a large amount of data on the different variants. Once the data was collected, they looked for mutations within genes associated with a higher or lower body mass index (BMI) - the measure, albeit imperfect, for determining obesity that is generally accepted.

Of the 16 BMI-related genes, 5 are expressed in the hypothalamus, the brain region that regulates hunger and metabolism. Variations in one of these genes, the GPR75, has been shown to have the largest impact on BMI. Individuals with the genetic variation that makes one copy of the gene inactive gain weight on average 5,3 kg less and are half as likely to become obese than those who have the active version of the same gene.

The variant that inactivates the GPR75 gene, with an effect on body weight, is however very rare: only 3.000 of the study participants have it - a very limited group when compared to the world's obese population.

A sea of ​​happiness: because being close to the water makes us more vital and serene ❯