Hypothyroidism: the beneficial effects of black cumin on Hashimoto's thyroid 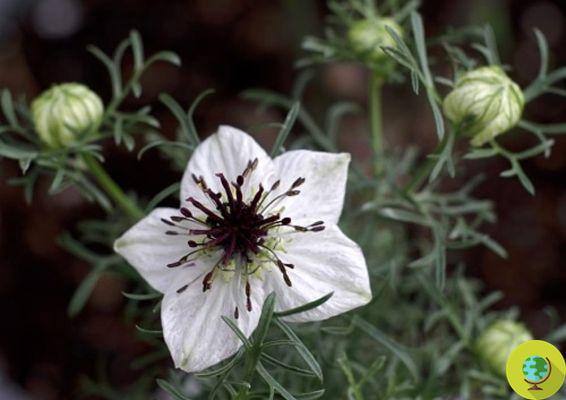 According to a new study, Hashimoto's thyroid, the most common cause of hypothyroidism, can be treated with black seeds, such as sesame or cumin.

Black cumin against thehypothyroidism. It is the new discovery that comes from a randomized clinical trial that reveals that the ancient healing food known as "Nigella sativa” (alias "black seed", Commonly the black cumin), formerly known as the "remedy for everything but death", can provide a ideal treatment is preferably used for autoimmune condition of the thyroid known as Hashimoto's disease, which is the most common cause of hypothyroidism.


Black cumin is also known as black seed, fennel flower, nutmeg flower, Roman coriander, black onion seed or black sesame: all names that can often deceive and lead to confusing Nigella with other spices, but instead refer to the same seed whose botanical name is proper Nigella sativa. It is a millennial seed stimulating and natural tonic properties e natural remedy widely used in oriental folk medicine but also in Ayurvedic, of Indian tradition. In India and China, for example, black cumin oil is used as a natural antibiotic.

READ also: HASHIMOTO'S THYROIDITIS: WHAT TO EAT TO HELP YOUR THYROID

The study, published in the journal BMC Complementary and Alternative Medicine, evaluated the effects of Nigella sativa on thyroid function and anthropometric characteristics in patients with Hashimoto's thyroiditis.

Looking at 40 patients with Hashimoto's thyroiditis, aged between 22 and 50 years, the scholars divided the participants into two groups: one group received two grams of encapsulated Nigella sativa powder and the other 2 grams of placebo at the day for 8 weeks.

The results showed that the treatment with Nigella sativa has reduced significantly body weight and body mass index (BMI), as well as serum concentrations of thyroid stimulating hormone (TSH) and antibodies to thyroid peroxidase (anti-TPO or TPOAb), while serum T3 concentrations increased in the Nigella sativa group. In addition, there was a significant reduction in serum VEGF concentrations in the intervention group. None of these changes were seen in the placebo group.

Black cumin, therefore, would improve thyroid status and anthropometric variables in patients with Hashimoto's thyroiditis. A natural remedy that researchers still want to investigate. Meanwhile, here are all the most important ones seeds for our health!

add a comment of Hypothyroidism: the beneficial effects of black cumin on Hashimoto's thyroid