All of us should explain to the children the importance of washing their hands well before going to dinner. Often, however, we do it only in words and we are not incisive enough. On the other hand, an American teacher who used simple slices of bread and bags to carry out an experiment with her pupils was perfectly successful in her intent.

We should all explain to children the importance of wash your hands well before going to the table. Often, however, we do it only in words and we are not incisive enough. On the other hand, an American teacher who used simple slices of bread and bags to carry out an experiment with her pupils was perfectly successful.

We adults too often underestimate the amount of microorganisms and bacteria that live on our hands and skin, but this is not the case with Professor Donna Gill Allen who made a very interesting and funny (but at the same time a bit disgusting) experiment together. to his students.

Donna had three slices of sandwich bread put in three plastic zip-up bags. The first contained bread placed inside using new gloves and therefore absolutely sterile and not contaminated (this acted as a control sample of the experiment); the second bag contained instead of the bread inserted after washing the hands; the third, finally, placed inside after all the dirty hands of the children had touched it.

The 3 bags were then labeled and left on the sidelines for a certain period of time until the germs visibly began to proliferate, particularly in the package where the bread with dirty hands was collected.

In a few days the slice of bread touched with dirty hands had visibly transformed above all in color, it had become blue-green.

The experiment, a kind of scientific test suitable for children, served to draw everyone's attention to the importance of washing hands. The professor who published the result on Facebook was particularly satisfied, obtaining around 49 appreciations and 73 shares. Many teachers have also decided to replicate the same experiment in their classrooms. 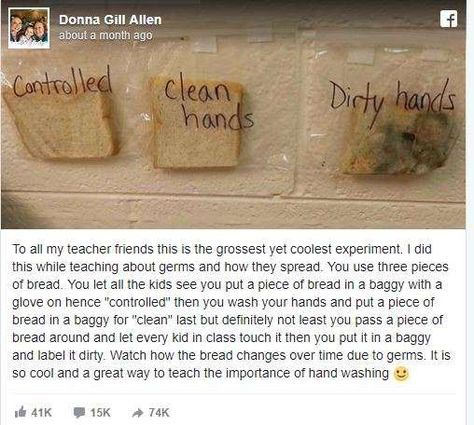 We can also try to replicate this fun test at home, who knows that finally our children are not convinced to wash their hands more often!