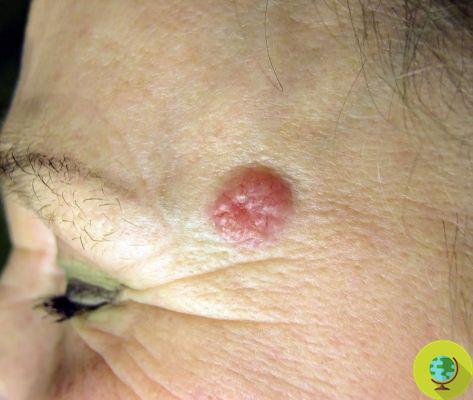 Green tea - so widespread in Eastern countries - helps burn fat, purifies the body, protects against colon cancer and - according to a recently published study - is also an effective weapon for treating melanoma.


Green tea and skin cancer. The green tea - so widespread in Eastern countries - it helps burn fat, purifies the body, protects against colon cancer and - according to a recently published study - is also an effective weapon for cure melanoma.

This is revealed by an analysis conducted by some Scottish researchers of theUniversity of Strathclyde and Glasgow, published by Cordys and Nanomedicine, according to which the green tea plant contains a particular chemical compound, called gallato di epigallocatechin and better known as EGCG - able to carry out truly satisfying therapeutic actions.

But to have natural and effective help in the treatment of skin cancer is not enough drink green tea every dayi: it is necessary administer it intravenously and binding the compound extracted from the plant to the proteins responsible for carrying the iron molecules, commonly absorbed by diseased cells, to the patients' bodies.

In this way the beneficial substance extracted from the plant of green tea directly affects diseased cells and effectively counteract the disease.

In short, the British scholars have discovered not only the great efficacy of the EGCG compound in the treatment of this specific tumor, but also found the most suitable "means of transport" to obtain maximum effectiveness.

According to the results of the tests made on two different types of skin cancerAfter 30 days of continuous administration of green tea, the tumors regressed, or even disappeared, without any damage to healthy tissues and without any unwanted effects.

The results show that 40% of tumors of both types disappeared completely, 39% of the first type and 20% of the second registered a regression, while 10% stabilized.

Not bad for a naturally occurring substance!

Here is the abstract of the study

- Tumors: here are the 10 golden rules for staying healthy while eating

add a comment of Green tea effective against skin cancers