One report analyzed 168 baby foods and found that 95% contained lead. Then arsenic, cadmium and mercury.

Toxic heavy metals that damage the development of children's brains would be present in food dedicated to them. This is what emerges from some tests carried out in the United States, which found that well the 95% of baby food analyzed contains toxic chemicals that lower the IQ. These also include arsenic and lead.


Commissioned by the US Healthy Babies Bright Futures (HBBF), the report analyzed 168 baby foods from leading US manufacturers, concluding that 95% contained lead, 73% contained arsenic, 75% contained cadmium and 32% contained mercury. A quarter of the foods contained all four heavy metals.

Among the foods that presented the greatest risk of exposure to heavy metals were rice based foods, carrots, sweet potatoes and fruit juices.

The results confirm that of a previous study of the Food and Drug Organization who had already found one or more of the same metals in 33 out of 39 types of baby food studied at the time.

So what does this mean for children's health? The chemicals found in baby food - arsenic, lead, cadmium, and mercury - are neurotoxins that can permanently alter the developing brain, erode IQ, and affect behavior.

“Even in trace amounts found in food, these contaminants can alter the developing brain and erode a child's IQ. The impacts add up to every meal or snack a child eats, ”the report reads. 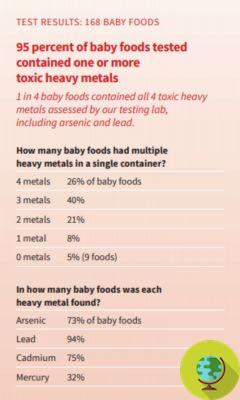 But why does baby food contain these toxic heavy metals? Well, as the researchers explain, these four harmful metals are found in all foods, not just baby foods. They are found naturally or due to environmental pollution. Crops absorb them from soil and water and are even found in organic food.

What to do then?

The analysis looked at which baby foods are at the greatest risk. As for rice snacks, for example (rice is the main source of arsenic in a child's diet because it is often used as a first food), for example, those with oatmeal or multigrain cereals can be preferred.

Even teething biscuits may contain arsenic, lead and cadmium, the report said. So you can think of easing the baby's pain by putting a nice fresh fennel in his hands, but keep an eye on it!

As for the juices, here you will find all those passed and failed.

The child of vegan parents is better: but what really happened? ❯

add a comment of 95% of baby food contains toxic metals. I study